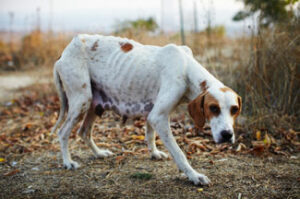 In January 2010, a concerned neighbor called the police because she witnessed a dog tied up outside, yelping in what sounded like severe pain. It turned out the animal had been brutalized. “A nine- month-old Golden Lab was discovered tied up outside, letting out agonizing high pitched yelps, shaking, cowering and bleeding from his butt,” wrote a blogger for Bitten Bound. “Upon closer inspection, it was apparent that there was a plastic handled object protruding from his rectum”. Wisconsin’s St. Croix County’s Sheriff’s Department arrested a suspect, 25-year old Michael J. Wondra. He was subsequently convicted of a felony animal cruelty count and was sentenced to eight months imprisonment and three years probation, which included required counseling sessions.

The specific act that Wondra was convicted of seems to encapsulate what most of us would think of as the ultimate form of animal cruelty. Generally speaking, any type of harm caused to an animal, from failing to provide a pet with necessarily food and water to physically inflicting pain, constitutes animal cruelty.

In a criminal justice sense however, each state has their own animal cruelty laws and even interpretations on what constitutes an “animal”. For instance some states may only regard mammals as animals, others may include all vertebrates (aside from humans), while still others may include all creatures except fish or crustaceans, according to The American Prosecutors Research Institute (APRI) in “Animal Cruelty Prosecution” (2006).

The ARPI adds that definitions of “animal cruelty” vary from state to state. An excerpt of Connecticut’s legal definition reads: “Any person who overdrives, drives when overloaded, overworks, tortures, deprives of necessary sustenance, mutilates or cruelly beats or kills or unjustifiably injures any animal, or who, having impounded or confined any animal, fails to give such animal proper care or neglects to cage or restrain any such animal from doing injury to itself or to another animal or fails to supply any such animal with wholesome air, food and water”.

Whereas Georgia defines an animal cruelty misdemeanor as “he/she causes death or unjustifiable physical pain or suffering to any animal by an act, an omission, or willful neglect”; and a felony or aggravated charge as “he or she knowingly and maliciously causes death or physical harm to an animal by rendering a part of such animal’s body useless or by seriously disfiguring such animal”. In any case, for all animal lovers out there, when someone intentionally is cruel to an animal, it is hard to comprehend what they have done and why. There are numerous motives or reasons that have been explored by criminal investigators, prosecutors and psychologists already, which will be discussed below. No matter the explanations, these traumatic assaults against man’s best friend or an innocent animal passing by are deeply alarming and unsettling.

Again, what constitutes animal cruelty varies according to state; however, there are some common categories that seem to fall under this umbrella of criminal behavior. Some of these include:

Neglect and Abandonment: Neglect constitutes not providing pets or companion animals with proper food, water, shelter and/or care. In some cases, neglect may not be intentional and thus some states may not deem it a criminal offense and instead attempt to provide education or have humane agencies step in. Other states may deem any form of neglect a serious offense. When the neglect on the part of the pet owner is intentional it is considered “cruel or malicious neglect,” states the APRI. In 2010, Jeffrey T. Ivey was convicted of a misdemeanor count for abandoning his eight dogs. When he moved to a new address from his Chesterfield County residence he left his pets at his former home. Four of the dogs were found dead and the others appeared emaciated and had no clear access to food or water.

Abuse and Torture: Abuse and torture against animals takes many forms, including burning, drowning, kicking, mutilating, choking, hanging, stabbing, throwing and shooting. According to the APRI, “Cases of intentional cruelty are the ones of greatest concern to the general public and the ones more likely to involve juvenile offenders”. These types of animal cruelty crimes suggest the offenders are a risk to society as a whole and often correlate with other crimes such as drug violations, domestic violence, weapons offenses and others. In March of 2012, 76-year old Michael Stephen Stools, Sr. allegedly shot his wife and their two dogs. According to Pet-Abuse.com, Stools told police that he was set off by the fact that one of the dogs had defecated inside their home and that his wife was complaining about it. He is currently held in a Denton County jail and has been charged with murder.

Hoarding: Animal hoarding consists of a person or persons keeping a large number of animals in poor conditions which often results in the animals dying from hunger or disease. According to the APRI, law enforcement and animal care & control agencies often find individuals guilty of these types of crimes are hoarding several hundred animals. The defendants in these cases are often assessed for mental health issues and it is often hard for them to rehabilitate, meaning it is difficult for them to break their hoarding behavior. In May 2012, a couple in their 60s was convicted with a misdemeanor offense for hoarding 350 dogs, 12 cats and two birds in their two-bedroom home. “The judge told George Army Burke, 64, and Cheri Rae Burke, 64, that psychological evaluations of them and their known behavior fit the diagnosis to a tee,” according to Pet-Abuse.com. They were sentenced to 60 days imprisonment plus two years probation during which time they cannot own any animals and must attend counseling.

Why Do People Abuse Animals?

Of all the animal cruelty crimes, it seems that intentionally hurting an animal seems the most inexplicable. While these violent acts seem to often be associated with juveniles, adults also commit these abuses. In a Psychology Today article (“Children Who are Cruel to Animals: When to Worry”), Joni E. Johnston, Speed cites several different motivations for kids and teens to commit cruel acts against animals. These include the curious drive to examine an animal and that animal is injured (or killed) in the process; peer pressure or the youth is pressured by an older or more powerful person to abuse; to relieve boredom or even depression; beastility; the child or youth has a phobia of animals; to use the animal to re-enact a traumatic event; to copy a parent or another adult’s actions; to emotionally abuse or manipulate another child (i.e. harming that child’s pet); and, to rehearse violent acts that the child or youth wants to commit against humans.

The CFAWR (Canadians for Animal Welfare Reform) describes other motivations for animal cruelty, described by Kellert and Felthous (1985), that are applicable to both youth and adults. These include, the perpetrator wanting to appear powerful or aggressive and possibly performing the violent acts to shock observers; the offender wanting control over that animal as a response to feeling out of control due to past trauma (such as abuse as a child); to seek revenge against someone by harming their pet; the offender is sadistic, meaning he or she derives pleasure from inflicting pain.

“80% of homes in which animal control agencies found abused pets, there had been investigations by child welfare agencies due to reports of physical abuse and neglect.”

The CFAWR adds that domestic violence and/or child abuse tend to go hand in hand with animal abuse. “They [Kellert and Felthous] say that in 80% of homes in which animal control agencies found abused pets, there had been investigations by child welfare agencies due to reports of physical abuse and neglect,” states the CFAWR.

The famous serial killers David Berkowitz, Ted Bundy and Jeffrey Dahmer were known to physically abuse animals for sadistic purposes during their youth. The Diagnostic and Statistical Manual of Mental Disorders (DSM) IV describes ‘conduct disorder’ as, “A repetitive and persistent pattern of behavior in which the basic rights of others or major age-appropriate societal norms or rules are violated, as manifested by the presence of three (or more) of the following criteria.” One of the criteria it lists is animal abuse or cruelty.

Additionally, the CFAWR adds that those that abuse animals are five times more likely be violent with human beings. In other words, a child exhibiting animal cruelty is probably not just going through a stage, but showing warning signs for potential violence against people or more violence against animals. “The link between animal abuse and interpersonal violence is becoming so well established that many U.S. communities now cross-train social-service and animal-control agencies in how to recognize signs of animal abuse as possible indicators of other abusive behaviors,” states the CFAWR.

In September 2007, such a disturbing tale of animal abuse took place in Montgomery County, Alabama. Twenty-year old Juan Daniels was convicted of a felony crime for committing an unspeakable act to his mother’s two-year old pit bull. Daniels was found responsible for chaining the dog to a post, beating him repeatedly with a shovel, dousing him in lighter fluid and setting him on fire. Supposedly what triggered Daniels to commit this act was that his mother told him that he could not borrow her car. Miraculously Louis Vuitton (the name given to the pit bull by the Montgomery Humane Society) survived, although 60% of his body was burned and it took him months to recuperate and heal.

In 2009, Daniels was sentenced to an imprisonment of nine years and six months. This was a record sentence in terms of length for animal cruelty cases in Alabama, according to the LA Times. At Daniels’ parole hearing in 2010, Louis Vuitton bravely attended to face his attacker. Daniels was denied parole.