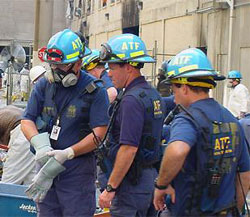 The ATF, also known as the Bureau of Alcohol, Tobacco, Firearms, and Explosives was put in place to fight organized crime, firearm trafficking, illegal uses of firearms, and violent crimes. The ATF, which is a part of the US Dept of Justice investigates cases involving the use of explosives, bombs, and arsons. The ATF was instrumental in bringing down the operations of the notorious Al Capone in the twenties. The ATF was formerly involved with tracking and regulating tax revenues gained from tobacco and alcohol; however, the responsibility was shifted to the newly formed Alcohol and Tobacco Tax and Trade Bureau (TTB). The TTB does not fall under the umbrella of the Dept of Justice, but instead, with the Treasury Department as of 2003.

How To Become an ATF Agent

Becoming an ATF agent starts with completing a criminal justice program, or a related degree such as a law enforcement or homeland security degree. Because being selected for positions in the ATF is highly competitive, those with masters degrees and related experience will have greater chances of getting a job with the department. If you are selected, you must pass a background check, drug test, written tests, physical fitness tests, and medical exams. Next, you will attend a 27 week training in Glynco, Georgia, which is touted as the longest, and most robust training for a federal officer; even greater than required by the FBI. Although the process of getting into the department seems rigorous, those inside attest to having highly stimulating and rewarding jobs.