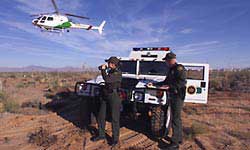 On December 14, 1999, a ferry boat arrived in Port Angeles, WA and a border patrol inspector, Diana Dean, was on duty. When a young man pulled up with all the correct identification, she questioned him in the manner in which she was trained and noticed that he was sweating on a cold December day. This subtle observation prompted further investigation and when his trunk was opened, he began running. The car was full of enough explosives to destroy a large building and the perpetrator had intended to detonate it in the Los Angeles Airport on New Years Eve. The importance of our nation’s border patrol security cannot be understated and that typical day in a small border town illustrates the magnitude of responsibility of the duties of our border patrol agents.

Upon being hired, you will be sent to a training program for 20 weeks (15 if you test out of the required Spanish) to get you prepared for the job. The training consists of Border Patrol Operations courses, firearms training, physical techniques, driver training and Spanish language training. It should also be noted that individuals must not have reached their fortieth birthday at time of selection.

Those with previous experience in the military of law enforcement may have an advantage over those with no relevant training in some form of security or related work. Your first step is to complete a degree in a related field such as homeland security, law enforcement, or a standard criminal justice program. While the rule is not written in stone, a bachelors degree is the most prevalent among those working as border patrol agents; they will look at your unique combination of experience and your level of education together when making a hiring decision.

If you have no previous law enforcement experience, a bachelors degree in a related field such as law enforcement, homeland security, or criminal justice, combined with work experience comparable in level of difficulty and responsibility, can be helpful. Once you have completed a four year degree, your next step is to apply for a position. If you are accepted, you will be drug tested, fingerprinted, and a full background scan will be done. Applicants who are conditionally accepted will need to be further interviewed. The interview consists of questions to assess your judgment and decision making, emotional maturity, interpersonal skills, and cooperativeness and sensitivity to the needs of others. The background check will review your credit, historical employment information and the details of your education.

As described above, Diana prevented the “Millennium Bomber”, who was headed for LAX airport to detonate a bomb on New Years Eve. Dean’s strong observational skills lead to the prevention of this tragedy.

Melendez-Perez is an immigration inspector working at the Florida airport. Mohamed al-Kahtani arrived in Florida from Saudi Arabia, but did not have all the necessary documentation in order to enter the United States. When Melendez-Perez questioned him about his plans in the United States, he noticed inconsistencies in his story, which prompted further questioning, and ultimately, he was sent back to Saudi Arabia. It was learned that one of the terrorists who was involved in the 9/11 attack was at the Florida airport waiting to meet up with al-Kahtani.

Anthony Jackson was a CBP official at the St Paul – Minneapolis Airport a few years after the 9-11 attacks. He stopped a man who had arrived from Amsterdam, and when he was searched, Jackson found papers that described terrorist attack details against the United States and Britain.