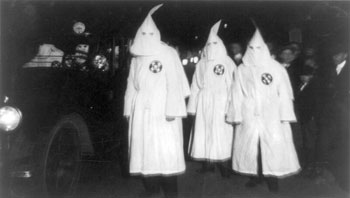 In present day America, there are around 4,000 to 5,000 Ku Klux Klan members spread out between approximately 110 chapters across the country. According to New Mexico State University’s Dr. J. Keith Atkins, the KKK is the oldest domestic terrorist group in the United States. Although the chapters may not be unified by a central ideology, Dr. Atkins states, “At the heart of Klan beliefs is the notion that violence is justified in order to protect white America”. He recounts a relatively recent event where a KKK leader, Charles Robert Barefoot Jr., was arrested in Johnston County, North Carolina in 2003. When local police and federal law enforcement agents received a tip that he and other members were plotting to blow up the local sheriff’s office, jail and personnel, they found an abundance of weapons, bomb-making ingredients and two already homemade bombs at his house.

The U.S. Department of Justice and the Federal Bureau of Investigation (FBI) define domestic terrorism as “the unlawful use, or threatened use, of force or violence by a group or individual based and operating entirely within the United States or Puerto Rico without foreign direction committed against persons or property to intimidate or coerce a government, the civilian population, or any segment thereof in furtherance of political or social objectives”. Simply put domestic terrorist acts are committed by Americans on American soil. The Weather Underground Organization (a far left wing group that bombed government and bank buildings), the Unabomber Ted Kaczynski (who sent bombs via the postal service) and Timothy McVeigh (Oklahoma City Bombing) are popular examples of domestic terrorists from the last 50 years.

While terrorist acts are carried out by either individuals or groups, homeland security expert Danny Davis states that domestic terrorism is more frequently carried out by a single person. “While foreign terrorism tends to rely more on groups, such as al-Qaeda or Hamas, domestic terrorists commonly act alone – commonly referred to as ‘lone wolves’,” Davis says as reported by Texas A&M University News. According to Dr. Tom O’Connor, terrorist acts can take on many forms. 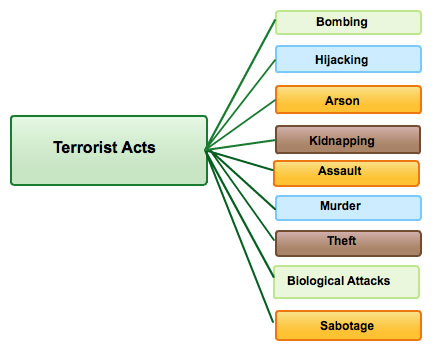 Ideology: (i.e. a system of ideas, principles, philosophies or a creed) is almost always the basis of a terrorist or terrorist group’s motives. “Advancing an ideology, whether that belief is political, philosophical or religious in nature, is the ultimate goal of a terrorist, whether that individual is acting in a group or alone and carries out those acts domestically or in foreign lands”, states Davis. Terrorist individuals or groups are generally divided into (but not limited to) three categories based on their motivations: right-wing, left-wing and single-issue.

Left-wing: Left-wing domestic terrorists are motivated by anti-capitalism, anti-government, environmental, socialist and revolutionary ideologies. The Weather Underground, The United Freedom Front, the Black Panthers and the Red Guerrilla Resistance are examples of past left-wing terrorist groups, according to Professor Mark Stevens of California State University Fresno. Some have stated that Ted Kaczynski was also driven by left-wing ideologies (i.e. his aversion to technology and his adoption of a neo-luddite lifestyle) but others add that his psychosis was a partial reason for his Unabomber acts.

Single-issue: Dr. O’Connor states that, “Special interest terrorism differs from traditional right-wing and left-wing terrorism in that extremist special interest groups seek to resolve specific issues, rather than effect more widespread political change”. Examples of single issues that motivate acts of domestic terrorism include anti-abortion, genetic engineering, environmental concerns and animal rights. Davis adds that most domestic terrorists react after a trigger or a stressor has occurred, although contrary to common belief most are not psychotic. He points out the example of Timothy McVeigh who was provoked to carry out the Oklahoma City Bombing after the Branch Davidian compound in Waco was raided by the FBI, ATF and other agencies.

The FBI has Joint Terrorism Task Forces (JTTFs) in over 100 cities across the country to address domestic and international terrorism threats and actions. The JTTFs are made up more than 650 local, state and federal agencies including the Department of Homeland Security (DHS), Immigration and Customs Enforcement, Department of Defense, the CIA and the Transportation Security Administration. Approximately 70% of the JTTFs in existence today were created after 9/11. In fact the 9/11 attacks inspired the creation of the DHS, whose founding principle and priority are “protecting the American people from terrorist threats”.

The Council on Foreign Relations states that the proportion of domestic terrorist acts conducted by individuals (versus groups) has increased since the Oklahoma City Bombing from 6.5% to 33%. Individuals, the Council adds, are harder for intelligence agencies to track down, but they are potentially less effective or destructive than organized groups.

Davis shares, however, that since 9/11, law enforcement and security agencies have been more effective at preventing terrorist attacks: “Domestically, law enforcement monitors the Internet, watches gatherings of resistance-minded elements and infiltrates harmful groups,” he says.

Known as the Olympic Park Bomber, Eric Rudolph was finally tracked down in June of 2003 after a five-year FBI-led manhunt. Police officer J.S. Postell found the suspect, who had been on the FBI’s Ten Most Wanted list, digging through a dumpster in Murphy, North Carolina. Rudolph had been hiding in the western North Carolinian forests, living, as a fugitive, off the land.

When a bomb went off at the Centennial Olympic Park during the 1996 Olympics in Atlanta, killing Alice Hawthorne and injuring over 100 spectators, security guard Richard Jewell was initially the suspect. Jewell had been the first to locate the bomb and attempted to clear the area as fast as possible.

Rudolph admitted his guilt in causing the Olympic Park bombing as well as three other bombings between 1996 and 1998, claiming one more life and injuring several more. The targets were abortion clinics and a gay night club in the regions of Atlanta and Birmingham. Many sources state that Rudolph’s motives were based on his anti-abortion and homophobic ideologies. When he was a teenager he became very close to Dan Gayman, who became almost a foster father of sorts. (Rudolph’s father was no longer alive). Gayman was a known figure of the Christian Identity, what the FBI called one of the country’s “most dangerous hate movement[s]”, according to NBC News.

In Rudolph’s confessional statement, an excerpt explains his particular motives for the Olympic Park bombing: “Even though the conception and purpose of the so-called Olympic movement is to promote the values of global socialism, as perfectly expressed in the song “Imagine” by John Lennon, which was the theme of the 1996 games – even though the purpose of the Olympics is to promote these despicable ideals, the purpose of the attack on July 27th was to confound, anger and embarrass the Washington government in the eyes of the word for its abominable sanctioning of abortion on demand”.