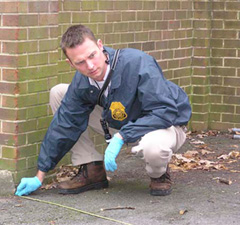 If you have been following the thrilling CSI: Las Vegas TV show, you probably think that being an evidence technician can be an exciting occupation. But property & evidence technicians know that there is more to the job than solving crime puzzles and uttering witty lines. You do not only need to have a certain level of expertise on the job, but also patience, flexibility and a capacity to lift objects weighing 25 pounds or more. However, even if it demands a lot of physical and mental involvement, it is a fulfilling job as you help solve crimes and contribute to justice.

The evidence technician job description involves collecting, receiving, examining, and storing of physical evidence or property, provided that it adheres to the Police and Criminal Evidence Act (PACE).

A police evidence technician collaborates with forensic scientists in collecting and analyzing evidence; fingerprint analysis, ballistics, DNA sequences, etc. Part of an evidence & property technician’s job is to carefully record the evidence, chain of custody documents, and related reports. He or she will also need to maintain secure evidence storage to ensure that crime scene evidence and properties are free from tampering. A Property and Evidence Specialist should be familiar with the evidence storage procedures of the police agency.

Once summoned by the court, a property and evidence specialist will prepare and exhibit the needed pieces of criminal evidence. Other tasks such as processing release forms of evidence and stocking supplies in the evidence processing room are also needed to be performed.