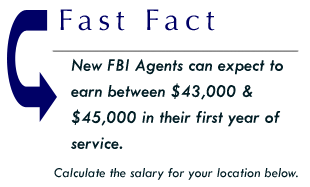 A freshly graduated Special Agent’s salary begins at approximately $43,000 per year but this salary can increase to anywhere between $63,000 and $69,000 depending on locality pay and availability pay adjustments. For instance, the FBI offices in the New York metro area pay roughly a 30% premium. Also, Agents who are moved to high cost of living offices, which are usually offices in large cities like New York City or San Francisco, Seattle, LA, etc., will be paid a one-time relocation fee of $22,000. FBI Agents typically start at a GS-10, but promotions are fairly regular to GS-13 (GS: General Schedule Pay Scale). You’ll find our most current annual salary data below.

*The FBI uses the GS scale which can vary greatly depending upon education & experience. Info from U.S. Bureau of Labor Statistics and usa.gov GS scales.

You can calculate the FBI salary base pay, by location, by using the below table. Take the Base GS Pay Scale wage, and multiple it by the percentage adjustment for a given city or state. 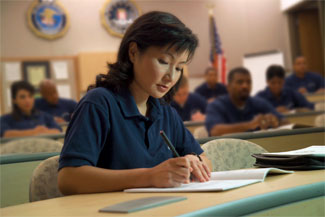 National security is always one of the primary concerns of the US Government and the FBI is central to keeping America secure. Because of this, the FBI is constantly well funded and usually in a process of expanding. It is unlikely that this career will be cut or shrunk in any way in the near future seeing as how deeply we value national security. So the demand for this job is pretty high but the amount of people who are seeking a job at the FBI is also fairly high. The appeal of working at the FBI is so great that people from all over the country apply every year to be part of a select group of FBI agents. This year there will be 900 graduates from the FBI training facility but there were a few thousand applications for the program. It might be difficult to get involved with the FBI but with hard work and determination, your chances of getting in are fairly good considering how sought after this job is.

The following degrees are some of the most common for those wishing to become an FBI agent.