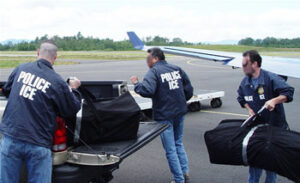 The ICE was formed shortly after the attacks of September 11, 2001 in 2002 under the newly formed Department of Homeland Security. The ICE combined the former US Customs, INS (Immigration & Naturalization Service), and certain departments within the FPS (Federal Protective Service) in an effort to be a more up-to-date and cohesive unit with common goals in the service of national security and immigration law.

Broadly speaking, the ICE oversees border protection, immigration issues, critical infrastructure security, international transportation, and the former economic management of the US Customs. ICE falls under the Department of Homeland Security. Within the ICE, the old functions of the INS are now split between several subdivisions and interacting players.

The primary job functions of those working for the ICE & USCIS

How do you become an ICE agent, what education & training do you need? While there is no specific degree required to become an ICE or immigration and naturalization officer, a bachelor’s degree is usually mandatory. A bachelor’s in homeland security, criminal justice, corrections, or law enforcement is recommended for those seeking careers in immigration & naturalization. While pursuing your degree, it is helpful to seek our elective courses in a foreign language. While speaking multiple languages can be helpful for positions in immigration, there are still several opportunities for those who don’t.

The newly formed departments now interact with other departments including local law enforcement, the Federal Protective Service, and Federal Air Marshals. The goal being to create a synergistic team effort to find, apprehend, and carry out administrative functions, which the former INS attempted to accomplish all on it’s own.

What is the function of the Enforcement & Removal Operations (ERO)?

One major subdivision of the ICE is the ERO (Enforcement & Removal Operations), which enforces hundreds of federal laws pertaining to illegal activities of foreigners in the United States. The ERO has relationships with embassies all over the world and seeks to employ those who are proficient in multiple languages.

What is the new structure of the INS? Who does what now?

Most of the immigration related jobs are tasked with enforcing illegal immigration laws as well human trafficking, and other illegal immigrant related activities. The ICE is in charge of several detention centers in the country that employ deportation officers and detention personnel who hold individuals suspected of criminal intent, illegal aliens, and human traffickers which go through a process of official removal if proper citizenship, work permits, or other acceptable circumstantial papers have not been issued.

Criminal justice degree and certificate programs featured here are educational programs and do not guarantee that a student or graduate will meet the particular requirements or qualifications to become a law enforcement, corrections, or peace officer at the state, national, or international levels. Students who are interested in pursuing such professions are encouraged to check with the applicable agencies for a list of requirements.