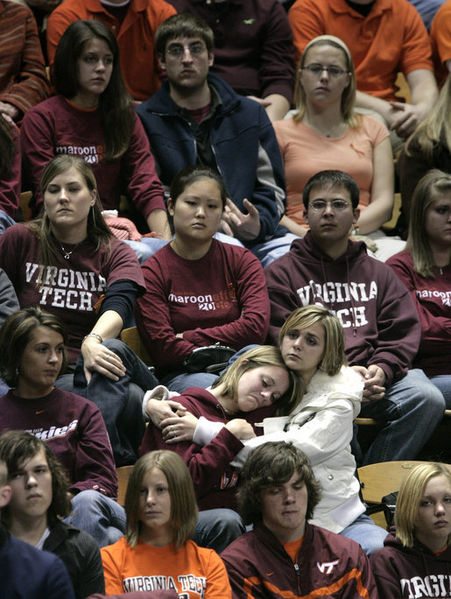 Last night thousands attended a candlelight vigil at the Virginia Tech in light of the events from the preceding 48 hours. Earlier that day, an alleged gunman’s body was identified to be 22-year old Ross Truett Ashley, a student from nearby Radford University.

On Wednesday, Ashley is suspected of going into a local real estate office, and while propping up a handgun, forced an agent to hand over the keys to his/her Mercedes SUV. The next day, the stolen vehicle showed up on Virginia Tech campus. Thursday afternoon, Ashley allegedly approached a member of the university’s police force, Officer Derek W. Crouse, who was conducting a traffic stop in an unmarked vehicle, and shot him to death. Once shots were fired, Virginia Tech made a campus-wide lockdown alert, sending an all-too-familiar reminder of America’s worst modern day massacre from four years earlier.

After reportedly shooting Officer Crouse, Ashley ran towards a parking lot and the campus’ greenhouses where he started removing some of his outer clothes, perhaps to remove any identifying traits from the shooting. A deputy sheriff drove through the parking lot and saw a male acting suspiciously and then briefly lost sight of him. Ashley’s body was found shortly after with a fatal handgun wound to the head stated to be self-inflicted.

What drove Ross Truett Ashley to allegedly commit these violent acts and then kill himself? Law enforcement has not found any connection between Ashley and Officer Crouse, a policeman specialized in crisis management who joined the Virginia Tech department six months after the 2007 bloodbath.

Professionals like forensic psychologists and criminologists study to understand the state of mind of violent offenders, the root causes of such acts or environmental factors that may have made someone crack. For those who knew Ashley, they stated he often kept to himself but that whenever they saw him in the halls, he would consistently run instead of walk. Was this simple observation a hint of a looming potential psychotic break?

After Cho Seung-Hui killed 32 people and himself at the university over four years ago, Larry King hosted a panel of experts including a psychiatrist, psychotherapist and criminal profiler. They discussed whether Cho was psychopathic, psychotic or severely depressed with elevated anger due to a trigger event. They speculated on the plays and videos he created, suggesting his delusions, being far away from family and a possible autism diagnosis when he was younger.

No matter how much research has been done, the human brain – its thoughts and feelings – still remains at least a partial mystery. If you would like to truly understand what makes someone do something so terrible, criminology or forensic psychology careers await you. Various schools across the country offer a Forensic Psychology Degree or Criminology Degree to help you start a thrilling, sometimes chilling, analytical, investigative and academic profession.