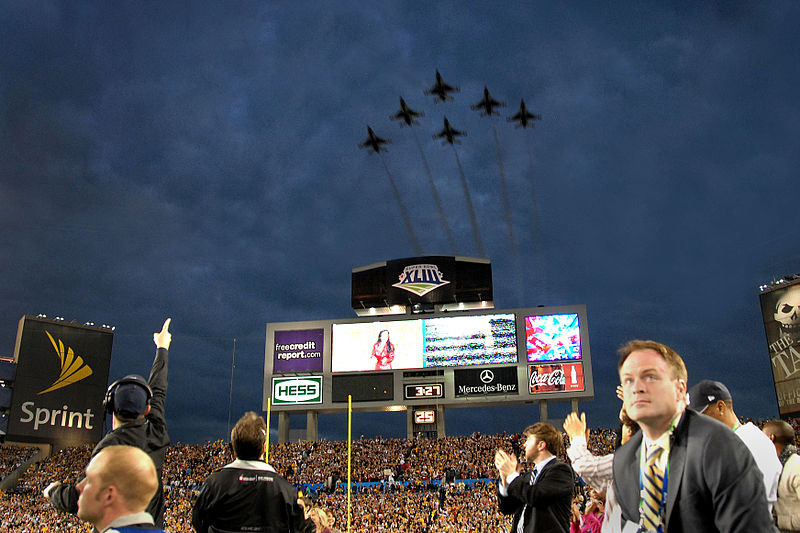 The New England Patriots face off against the New York Giants today in Indianapolis for Super Bowl XLVI! Last year the Super Bowl broke the record for the television broadcast most watched in history by Americans with approximately 111 million tuning in. Indianapolis’ Lucas Oil Stadium will be seating around 70,000 fans for the 46th Super Bowl.

The Examiner reports that this year’s security measures for the major sporting event are “unprecedented”. According to the Associated Press (Carrie Schedler and Charles Wilson), the Super Bowl ranks just below U.S. President and Secret Service events on the federal government’s national security scale.

Weeks ago, military (including NORAD) local law enforcement (some undercover) and federal agencies (such as the FBI and U.S. Customs and Border Protection), began preparing for what is estimated to be the highest concentration of fans for a Super Bowl – 140,000 culminating into Indianapolis’ downtown in addition to those able to get a seat in the stadium.

One unit, dubbed the “Hit Team”, has been patrolling the crowded areas, some with K-9 companions, looking for any sign of bombs and biological, chemical or nuclear weapons among anything from trash cans to stage areas. They started looking for potential threats a week ago, working round the clock.

Throughout today’s game, U.S. Customs and Border Protection and the Air Force will be patrolling the skies via helicopter. Their flight practices leading up to the Super Bowl have not been in vain, as for every Super Bowl since 2005, at least one plane has entered the no-fly zone (the protective area surrounding the football stadium), ABC News reports.

On the ground, giant X-ray machines are set up to examine each and every vehicle that enters the Lucas Oil Stadium and surveillance cameras have been installed to observe every possible angle inside and outside the stadium. There are cryptic air monitors that are capable of detecting threatening toxins and biological substances. Even five remote-controlled robots programmed to disarm bombs and other explosives are on standby. Four of them weigh 135 pounds; a six-foot tall robot, “big brother”, weighs double. They are fitted with cameras and movable arms.

Those on security deploy at Super Bowl XLVI are “preparing for the worst, but hoping for the best” [ABC News]. Indianapolis’ Public Safety Director, Frank Straub, said regarding the potential for threat amidst crowds of thousands of people, “You always have to plan and think about the reality of terrorism exists in the world.”