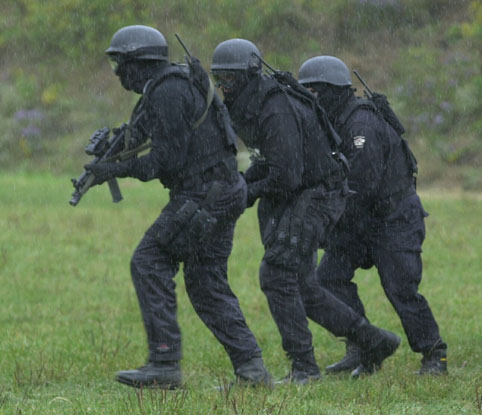 Of all the various criminal justice careers that exist, did you know that “mantracker” is among them?

Troy Chaffee and another King County, Washington sheriff’s deputy put their extensive tracking experience to use this past Thursday in search of a fugitive suspected of double murder. Chaffee and the female deputy disguised themselves as a couple hiking through the forests of Rattlesnake Ridge in search of Peter Keller’s bunker. But instead of carrying guide books and energy bars inside their backpacks, they had extra ammunition and handcuffs.

On April 22, Keller allegedly shot and killed his wife Lynnettee, his 18-year old daughter Kaylene and the family’s cat and dog; the next day he purportedly set their home ablaze. Keller’s co-workers heard him talk of a bunker he had started building eight years ago for apocalyptic times; photographs recovered from his home computers provided clues to where the hide-out, what he called “Camp Keller”, was located.

Keller was a fugitive and investigators believed he was hiding out at Camp Keller. “I was highly aware the whole time he could be watching us. He had high-powered scopes, he had high-powered binoculars. I had to assume he was watching anyone who could be in his area,” described Deputy Chaffee, as reported by Linda Thomas (MyNorthwest.com). Keller also had a whole arsenal of weapons as well – one he ended up using to take his own life.

Chaffee and his colleague (two of the only three certified trackers in King County) were incognito and thus couldn’t rely on their entire mantracker repertoire, such as getting down on their hands and knees looking for evidence. Yet, they were still able to discover fresh footprints among a trail-free incline and knew they belonged to Keller. Gene Johnson of the Associated Press superbly describes the process: “By his fourth step, [Chaffee] knew it was Keller. There were small leaves in the dimpled, muddy earth. They were torn, but the tears were fresh … On the leaves were specks of dirt: They hadn’t been washed off, so must have been left before the last rain – sometime overnight or early that morning. The prints appeared to come from military-style boots”.

The trackers were provided sufficient information to detectives so that dozens of SWAT officers were able to surround the bunker on Friday; smelling fumes from a woodstove confirmed Keller’s presence. They sent in tear gas after numerous requests for him to surrender. Saturday, SWAT officers were able to insert a camera inside the bunker which revealed Keller was dead from the self-inflicted gunshot. SeattlePi.com’s Casey McNerthney describes the contents of Camp Keller which included bullet proof vests and binoculars, a cache of weapons and ammunition, bottles of pop, fuel tanks and a generator.