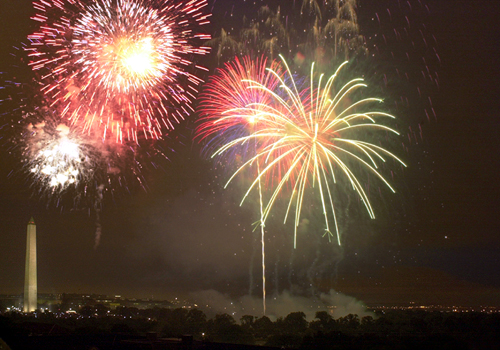 Tomorrow Americans will fire up the barbecue, set up their lawn chairs along parade routes, attend spectacular firework shows and wear or wave the ‘red, white and blue’. These community-minded celebrations stem from Thomas Jefferson’s tireless drafting of the Declaration of Independence (approved on July 4, 1776). This document signifies when the American founding colonies gained independence from Great Britain’s policies.

Not only is the Fourth of July an exciting day for the average American citizen – law enforcement agencies across the country step up their patrols to ensure as safe a holiday as possible. Let’s travel around the United States and find out how police and sheriff’s departments have been preparing for Independence Day.

In Ottawa County, Michigan, ‘talking urinal cakes’ were launched by law enforcement agencies, restaurants and the Michigan Licensed Beverage Association, reported The Holland Sentinel. The round disks placed in urinals of ten regional restaurants read “Call a Ride – Get Home Safe” and have an audio function prompting individuals to avoid drinking and driving. Agencies throughout the state are also increasing patrols and checkpoints to monitor for impaired driving. The Holland Public Safety Police are employing their BATmobiles (‘mobile blood alcohol testing vans’).

This past weekend until this coming weekend, 104 law enforcement agencies across Connecticut are jointly increasing 24-hour patrol. “Fairfield Police Chief Gary MacNamara said this is a unique year because the July 4 holiday falls on a Wednesday,” wrote Lauren Sievert of the Litchfield County Times. “That means some residents will be celebrating the weekend before, some the weekend after, and also mid-week on a day off from work”. According to Chief MacNamara, traffic accidents and DUIs (driving under the influence) increase during Fourth of July festivities; in previous years Connecticut officers have had to pull over nearly 4,000 vehicles for potential charges during the holiday period.

In Florida, CBC Miami shared Police Chief Manny Orosa’s warning: “Do whatever you do for fun…but don’t use a gun.” Chief Orosa’s urging for residents to avoid firing their guns up in the air synchronously with Fourth of July fireworks or any type of celebration is warranted. CBS points out a tragic example when a six-year-old boy was hit by a falling bullet fired shortly after the 2010 New Year was rung in. (Luckily the accident was not fatal). “If you shoot your gun in the air…it’s going to come down regardless of the angle, regardless of where you shoot the bullets. When it comes down, somebody’s going to get hurt,” said Miami Police’s Major Garry Jeannition.

These are just some of the examples of how law enforcement agencies across the United States are ensuring a happy and healthy Independence Day. Happy Fourth of July to you and your loved ones!