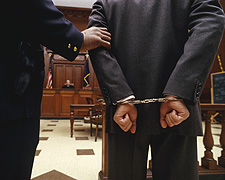 “All rise…” For over three decades Mr. William Powell, Jr. has pronounced these words. Since 1979, he has served as a deputy sheriff and a Court of Common Pleas bailiff in Licking County, Ohio. In 2008, he was awarded the title State Court Officer of the Year; in 2009, he was honored with the Justice Evelyn Lundberg Stratton Award.

The Ohio Bailiffs and Court Officers Association’s website describe Powell’s exemplary service: “He works well with judges and he has a very positive attitude and works well with jurors under sometimes difficult circumstances. Not only does he act as bailiff in the courtroom but is also a security officer in the Courthouse…He is reliable, honest, and fair with the public, and he sees things that need to be done and does them without being asked…He has always shared his time, knowledge, and expertise to enhance the security and safety of those who use the courts”.

Each state has their own system, regulations and duties for bailiffs and in some cases they may go by other titles such as “court officers”. Depending on the state, bailiffs may work for the sheriff’s office, corrections unit, the court or another agency. But generally speaking their job is to ensure order during legal proceedings. Specific duties include beginning and ending the court session by asking everyone to rise for the judge’s entrance or departure, escorting the jury or prisoners, guarding the jury during sequestration, administering the oath to those testifying and/or enforcing rules of the courtroom.

To the outside world, a bailiff’s day-to-day may appear quite routine, but it can be quite the opposite when a courtroom is filled with heated emotions from an accused, lawyers or spectators who do not agree with a verdict. In June, for example, in a Louisville, Kentucky courtroom, an inmate that was 6’4 and 260 pounds attacked a bailiff. He wrapped his hands around the court official’s neck and it took three people to hold him down.

In a Times-Picayune article from June 2012, Claire Galofaro describes the camaraderie and bravery of the bailiffs of St. Tammany Parish Sheriff’s Office: “The bailiffs work long, often odd hours and often spend more time together than with their own families. They check each person who walks through the courthouse doors. They transport inmates and secure judges, jurors and attorneys. They wrangle anyone who becomes unruly in a building that routinely houses the worst moments of people’s lives…The bailiffs pledge to take bullets for one another. Friendships form fast, more like families than co-workers”.

If you have the drive, the determination, the passion and the stomach for this career, you will be choosing a noble profession. A combination of education (i.e. a criminal justice, law enforcement or corrections degree) and experience (i.e. from prior employment, a co-op or volunteer work) will pave the way to securing a bailiff position.