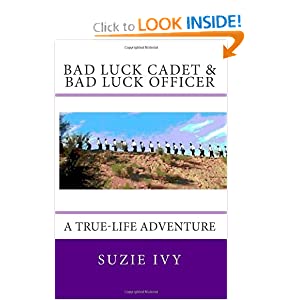 A 44-year old woman, bed-ridden with a broken hip and forty pounds overweight decides one day she is going to become the first female police officer in her town. Sounds like the perfect plot for a fiction novel, right? It’s actually the true story of Suzie Ivy. And guess what? Her decision to pursue a career in law enforcement became a reality. She tells her inspirational tale in her book Bad Luck Cadet & Bad Luck Officer, A True-Life Adventure just released this past spring.

CJSI’s Editor, Aaron Heyntsen, had the pleasure to recently interview Detective Ivy after reading her book. He recommends the book to anyone wanting an inside look at what it’s like in the police academy and to become a police officer; also anyone, looking for inspiration when barriers just seem to be in the way, should read her story. “She describes her adventures in a down to earth and engaging tone, often humorous, which at times made me laugh out loud and at other times made me well up with tears,” Heyntsen writes. “When I finished her book, I got up the next morning and went for a jog – I was inspired!”

In Heyntsen’s interview with Detective Ivy, she reveals personal details on her struggles and ultimate triumphs from starting as a patrol officer in her mid 40s to working her way up to investigator. Reading her responses in regards to her age and being the first woman in her small town to be a law enforcement officer is truly motivational. In fact she shares that being a police officer on a daily basis is representative of not giving up on your dreams, even when you’re feeling like you hit rock bottom. “If you give up on the streets as an officer, you can die,” she says in a response.

Also included in the interview, Detective Ivy describes a case she worked on which led to capturing a multiple murder suspect, which involved coordinating with the FBI and had her up in the mountains to retrieve the body. She additionally discusses the dichotomy between men and women and how they respond to the job, good versus bad cops and how she handles the day-to-day working in sex crimes.

To read the full intriguing interview with Detective Suzie Ivy and the review of her book, click here.