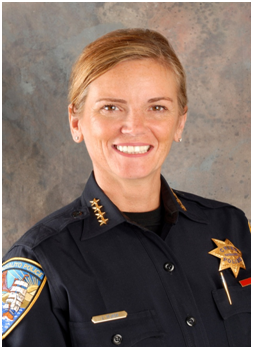 In our last blog we learned about community policing through the successful initiatives of the Chief of the Citrus Height Police Department, Chris Boyd, two time winner of the James Q. Wilson Award for Excellence in Community Policing (2012 and 2013).

Chief Jennifer Tejada of the Sausalito Police Department was one of two finalists for this year’s James Q. Wilson Awards (for her department’s Homeless Advocacy Program). CJSI was honored to correspond with Chief Tejada to learn about what community policing means to her and some of her department’s outstanding projects.

What is Community Policing?

“Community Policing is engaging the community to partner with the police department to address and prevent crime in our neighborhoods and prioritize goals and objectives for service delivery and training,” said Chief Tejada over e-mail. “To me as a leader of a police agency, when we fully embrace the philosophy of community policing, we become transparent, we build trust and value in who we are and what we represent, and we become part of the fabric of the community we serve.”

The Sausalito Police Department runs several community policing programs. For example, they host Citizens’ Academy, which is a 10-week inside look at the SPD, where participants  attend classes on a range of topics (from drug crime to arrest laws), get to go on ride-alongs and participate in other experiential law enforcement activities. For the SPD’s Recess Patrol, police officers go to schools during recess and play or hang out with the students. “It builds positive relationships with the kids as well as gives them an opportunity to interact with police in a non enforcement situation,” said Tejada. “This is particularly important for the children who live in communities where crime is prominent and a daily occurrence in their lives.”

Other Sausalito Police Department community programs include the Volunteers in Policing (VIPs) program, the Are You Okay program, the School/Law Enforcement Partnership and the Homeless Outreach Program.

The Homeless Advocacy Project helps individuals who are homeless or marginalized (i.e. due to mental health or addictions issues) get access to vital services, through a partnership between the Sausalito Police Department, the County Health Department and County Veteran Services.

What’s unique about this program is that it helps not only those from the community who live on land, but also those who live on the water, Richardson’s Bay. This marginalized population living on boats is referred to as “anchor-outs”, according to Jessica Mullins’ Marinscope article from November 2011 (“On the outs?”). “Tejada said she was motivated to reach out after one Sausalito anchor-out candidly told her he was ready to come off the water after living there for 25 years,” reported Mullins. “‘He said his boat is filthy, full of flies, and he hasn’t showered in a year,’ [Tejada] said, adding that the man was worried he would meet the same fate as three anchor-outs he knew who died last winter.”

“The officers are trained to recognize when a person they come into contact with would benefit from a referral to services in addition to/rather than an enforcement action,” said Tejada by e-mail. “The officers notify local service providers about individuals who, during the course of their duty, they come into contact with who are in need of assistance.”