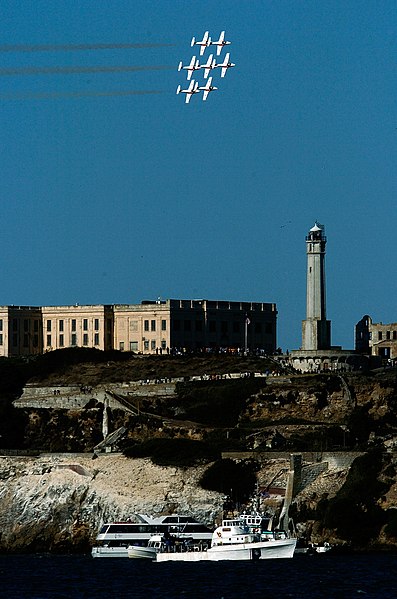 Alcatraz Island (home to a federal prison until 1963)

On June 2, 2013, The Bakersfield Californian published an extremely profound and honest account written by Will Adams (“WILL ADAMS: For a correctional officer, the workday is just another day in the war zone”).

Adams has been working in corrections for 25 years for the Kern Valley State Prison in Delano, California, first as a correctional officer, followed by a promotion to the position of sergeant lieutenant, and now as a correctional counselor II specialist. In his newspaper commentary, he simultaneously described the horrors and vital importance of the correctional profession. It’s clear from Adams’ words that those, who remain in corrections for as long as he has, deal with daily events that most of us will never encounter, and probably many of us could not handle if we did.

An excerpt from his entry published in The Bakersfield Companion reads:

“During our shift in the war zone [prison], we witness violence, death, loss, suffering and depravity that is unimaginable to most people. We do not have the luxury of stopping to vomit or pause to cry. Every moment must be regarded as precious time for interdicting drugs, gangs, weapons, vice rape and murder… It is isolated, contained and controlled by my family in green. It does not spill out into the streets of our cities. We keep the war zone behind the walls and in our heads. It effects our families and friends, but they do not see or truly understand it…And so, we carry our burden through our career, retirement and then to the grave.”

The study also referenced PTSD prevalence statistics for other professions from other studies conducted between 2005 and 2011. For example:

Although the results are yielded from different studies at different times, generally speaking it suggests the PTSD rates are highest among correctional officers compared to these other professions.

Why Would I Want to Work in Corrections?

If you have been thinking of becoming a correctional officer, or working in another area of corrections, you may be having second thoughts after reading the above. It’s true—not everyone can hack the job. But consider some of these comments from a recent Indeed.com Department of Corrections discussion board:

“The co-workers always look out for each other because it can be a dangerous environment. Working there has taught me to be much more observant of my surroundings and now I see things I might have missed before. The most enjoyable part of the job is seeing how what you do affect people and seeing them appreciate the work you do.”

“I have learned a lot about inmate behaviors, conflict resolution crises intervention. My co-workers were very helpful and loyal…The most enjoyable part of the job was to know the job was done, the count was clear, nobody got injured and the inmates were safe and secure.”

“Working for the Dept. of Corrections was amazing. I have learned a lot and was able to develop my self greatly. My co-workers were all fantastic people and we really got on well…The most enjoyable part of my job was being able to make a difference in a person’s life changing their way of thinking and they way they lived before.”

If you are meant to work in corrections, for the benefit of society and to ideally promote the rehabilitation of inmates, know that you will be filling an essential role.