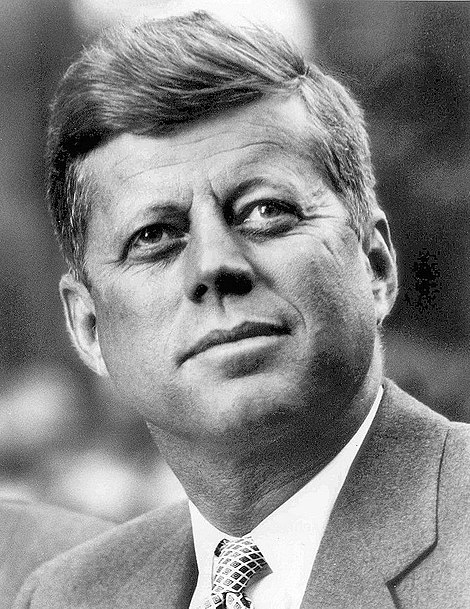 On Friday, November 22, President John F. Kennedy was remembered on the 50th anniversary of his assassination.

It was the first time Dallas officially held a memorial. According to the Chicago Tribune 5,000 people attended the ceremony at Dealey Plaza (the site where Texas governor John Connally was wounded and JFK was fatally shot); Mayor of Dallas, Mike Rawlins, said about the 1963 tragedy, “Our collective hearts were broken.”

President Barack Obama ordered that flags across the U.S. be flown at half-mast to pay tribute to the late president. In a proclamation remembering JFK, who he calls an “extraordinary public servant,” President Obama said:

“…John F. Kennedy weathered some of the most perilous tests of the Cold War and led America to the cusp of a bright new age. His leadership through the Cuban Missile Crisis remains the standard for American diplomacy at its finest. In a divided Berlin, he delivered a stirring defense of freedom that would echo through the ages, yet he also knew that we must advance human rights here at home. During his final year in office, he proposed a civil rights bill that called for an end to segregation in America…”

(Read the full proclamation at: http://www.whitehouse.gov/the-press-office/2013/11/21/presidential-proclamation-day-remembrance-president-john-f-kennedy).

Also on Friday, the Federal Bureau of Investigation (FBI) shared a story from one of its former agents, Robert Frazier, who played a key role in investigating JFK’s assassination.

Now 94, Frazier was the FBI’s lead firearms and ballistics examiner that November in 1963. He and two other examiners were called in to conduct separate examinations and then compare their results.

“By that evening, as a shocked country tried to comprehend Kennedy’s assassination, FBI agents and other federal officers had already begun delivering evidence to the FBI Laboratory—then located in Washington—including the rifle that Lee Harvey Oswald used to kill the president,” states the FBI’s November 22, 2013 story (“The JFK Assassination: Former Agent Recalls Role in Investigation”). “Well after midnight, Frazier and his colleagues went to the Secret Service garage to gather evidence from the presidential limousine. The vehicle had been flown from Dallas back to Washington that afternoon.”

Frazier and his colleagues worked straight through to Sunday, slept about five hours, went back to the lab and worked straight through to Wednesday. In fact, for two or more years Frazier worked on the case, which included traveling to Dallas and re-enacting Lee Harvey Oswald’s alleged actions from the sixth floor of the Texas School Book Depository (which is now a museum), as well as testifying in front of the Warren Commission.

“Beyond the facts of the case and the volumes of findings Frazier’s firearms and ballistic examinations produced, the assassination still evokes an emotional response from him 50 years later,” states the FBI story. “‘It was a sad situation,’ [Frazier] said. ‘Just remembering that it was Kennedy and what a personality he had. … It was a terrible, terrible thing.’”