Police detectives, unlike police officers, don’t wear a uniform, drive patrol cars, or patrol; instead, they spend much of their time compiling information and evidence for the cases they are assigned. They wear plain clothes, usually a suit and tie, and drive unmarked cars. Because police detective is a higher ranking and higher paid position than police officer, it requires more experience and knowledge. 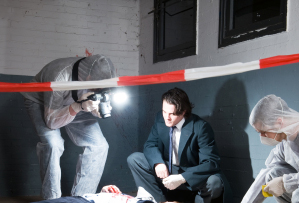 Time spent as a patrol officer is usually mandatory before becoming eligible to pursue the position of detective. While a great deal of knowledge is learned on the job, further training and education in investigative techniques are required to make detective. This training and education are specified by the department that employs the aspiring detective. Much of a detective’s time is spent on investigation and paperwork, but they are expected to maintain a certain level of physical fitness.

What does a Police Detective do on a typical day?

General detectives do just as the name implies, general investigation, whereas the others specialize in certain types of crime. Homicide detectives focus on cases involving suspicious deaths. Once they rule a death is not by accident or suicide, but in fact a murder, they then proceed to delve further into the case and work until they either solve it or can go no further. They work closely with their CSI unit, which collects, analyzes, and reports the physical evidence, freeing up the detective’s time to focus on suspects and witnesses.

Financial crimes detectives focus on the growing problem of white collar crime. While no one is physically harmed in the commission of a financial crime, victims are damaged or devastated financially. Financial and white collar crimes include fraud such as check or mortgage fraud, money laundering, embezzlement, identity theft, and bribery. Drug enforcement detectives handle illegal drug related cases involving drug trafficking, sales, and possession. They work primarily with their local department but team up with members of state and federal drug enforcement when necessary. The Drug Enforcement Agency (DEA) is a federal agency that enforces the laws and regulations of the United States concerning controlled substances. The DEA employs Agents, which is what usually comes to mind when thinking of the DEA, as well as Diversion Investigators, Chemists, Fingerprint Specialists, and Intelligence Research Specialists. Having detectives that focus on specific crimes helps cut down on having them spread thin, while allowing them to hone their skills in their specialty; thus, they are more effective in their jobs and have the ability to solve and prevent crime. To learn more about crimes and criminal intent, check out our criminal minds article series. Regardless of the type of detective, thorough documentation is imperative and require in all aspects of any detectives case file.

One common way to become a more competitive candidate for Detective is to start by completing a criminal justice bachelor’s degree, then while gaining valuable on-the-job experience, continue working on your education via an online criminal justice degree at the masters level.

What are the requirements to make detective?

In order to make detective, you must first serve as a police officer for a certain period of time, (depending on the precinct in which you are employed, generally 1 to 5 years), and complete further training, including physical, tactical, and general education preferably at the masters degree level. Take a look at our recent interview with retired FBI Agent and true crime writer, Jim Fisher.

How does a police detective interact with other divisions such as forensics?

Police detectives interact with police officers, who are usually first on the scene of a crime, the forensics unit, which will gather the physical evidence at the crime scene, then the forensic laboratory, which will analyze the evidence. They may meet personally or receive written reports.

What is the next promotion after detective?

The next promotion after a detective is sergeant, then lieutenant. Oftentimes in law enforcement you can move laterally as well as up in the ranks. The possibilities for promotion are plentiful, as long as you are willing to put forth the effort.