The US Secret Service: Duties, Past Present, & Future

Founded in 1865 as part of the US Department of Treasury, the Secret Service is one of the oldest investigative agencies in the country. Its original purpose was to combat the biggest problem of the time-counterfeiting currency, however the duties of Secret Service agents officially expanded to include the personal protection of the president after the 1901 assassination of President William McKinley in Buffalo, New York. 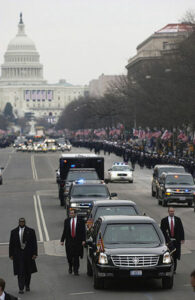 Presidential protection is one of the many jobs of the Secret Service. Secret Service agents travel with the President & his family during the inaugural parade route.

Other protection duties include providing security to major presidential candidates and their families within 120 days of the general election, individuals identified as having a need for protection by a Presidential Executive Order, and National Special Security Events designated by the Department of Homeland Security.

Secret Service Agents also investigate and prosecute crimes that affect the financial infrastructure of the United States of America (such as counterfeiting and money laundering). The Secret Service is charged with the task of investigating major financial crimes against the United States. These include counterfeiting (both of US currency and of US Government obligations), forgery of US Treasury checks, theft of US Treasury checks, forgery or theft of US bonds or other securities, and cases of credit card, telecommunication, computer, and identity fraud and other crimes that directly affect financial institutions that are federally insured. In other words, the Secret Service is also responsible for protecting the financial structure of the United States from threats both foreign and domestic. Their financial protection duties are partially outlined in the Counterfeit Detection Act of 1992 which dictates how currency must be printed and/or reproduced.

One of most famous Secret Service & Treasury cases in United States history is that of notorious gangster, Al Capone, convicted for income tax evasion. Capone was investigated by Treasury agent Eliot Ness (acting under the Volstead Act) who was assigned to the agency’s Prohibition Bureau at the time. Agent Ness and his officers created a great deal of disruption to the illegal enterprises of Capone and his associates. With the help of 10 hand-picked officers, Ness was able to adversely affect Capone’s operations. Capone was eventually jailed, although it was not at the hands of Ness as popularly believed throughout history.

The Future of the Secret Service

As technology and enforcement needs change, the duties of the Secret Service continue to expand. Through initial training and continuing education, the agents continually learn of new crime fighting techniques, technologies and counter-threat methods to protect our nation’s assets. Although they are one of the smallest government investigative agencies, their carry enormous responsibilities in insuring our nation continue to function on a daily basis.