Surprisingly, about 99.9% of peoples DNA sequences are the same.  Every person in the world is genetically closely related, but enough of the DNA is different to distinguish one individual from another.  The newest twist in this story comes from the case of a California serial killer case that the LA police department has nicknamed the “Grim Sleeper.”  On July 7, 2010, a suspect, Lonnie David Franklin Jr., 57, was arrested in the case with the assistance of family DNA tracking.  The use of Familial DNA allows police search an entire family tree and go further with their investigations, comparing crime scene evidence it to “near” DNA matches. They may hit on relatives of the person who committed the crime, who are already in the DNA database.  Using this method, police are able to find suspects that they might not otherwise know about. 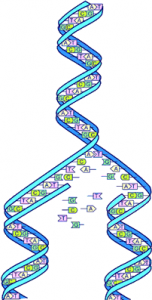 According to the American Association for the Advancement of Science, “California has allowed so-called familial DNA searches, in which investigators look for close-but-not-exact matches between DNA evidence collected at crime scenes and the state’s data bank of DNA collected from 1.3 million convicted felons. The method has a longer history in the United Kingdom, where it led to a conviction in a murder case in 2004. In Colorado, the only other U.S. state to allow it, the method led to a guilty plea in a car-theft case in Denver last year”.  The state of  Virginia is also weighing the use of family DNA.  The Virginia crime commission considered if they should allow the use of family DNA in November.  According to Virginia Prince William County Commonwealth Attorney Paul Ebert is should be used.  He told WTOP radio, “it’s the type of technique that solves the worst of the worst, these serial people who need to be taken off the street.”  Virginia would  become 3rd state to use familial DNA searches.

The Challenge To Familial DNA Testing

According to a February 28, 2007 NPR interview, Critics say this practice, called familial DNA testing, invades the privacy of innocent people.  During the interview, Professor Hank Greely, a Professor of Law and Genetics, Stanford University said, “it’s one thing to say that it’s okay to have felons have their DNA in the database, even those are disproportionately African-Americans, because they brought it on themselves by committing the crime, but now you’re making suspects out of all of their relatives, and I think you could argue that that’s unfair.”

I’m sure we’ll here much more about the use of Familial DNA profiling as law enforcement and legal systems throughout the country weight the pros and cons of this technique.