New York City K-9 police officers were among the many who scoured the highway along Long Island beach as officials uncovered the bodies of eight prostitutes believed to have been killed by a serial killer.  It is believed that the women were contacted through the popular on-line advertising site, Craigslist.org.  After killing the victims, the suspect (who is yet unidentified) dumped the bodies along highway in this remote area of New York.

Police used cadaver dogs to aid in the search for the remains and since the report of the missing woman have identified eight possible victims.  The use of a cadaver dog is a valuable tool to help locate victims, solve crimes and give closure to the family of the victims.

Cadaver dog training is a highly structured program usually offered at site such as the Niagara County K9 Training Center.  At Niagara County K9 center,  officers and dogs are trained together in the fields of narcotic detection, cadaver detection, bomb or explosive detection, search and rescues, and police protection and safety. 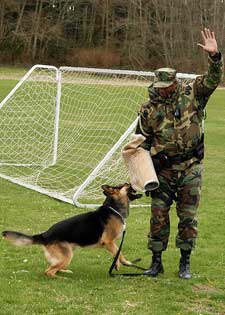 Cadaver dogs are trained specifically to detect the smells of human remains and lead investigators to the scene (whether it be the scene of the crime or the dump site for the body).  The dogs are trained to detect the scents of hair, bone, blood and human tissue.  Trainings are usually held over the course of two weeks; however, the training of the dog begins when it is a puppy.  By utilization of real and pseudo scents, the dogs and their trainers are educated in the specialized field of human remains detection.  Most classes are very small (only 4-6 teams per instructor) and the training is highly structured and intense.  The training consists of placing the items in various locations throughout the training site and then working with the dogs and officers in finding these “hot spots.”  Training of this nature is much the same as it is for training hunting dogs.  It is very important the officer who will be working daily with the canine be involved in the training process in order to continue that working relationship and develop the trust necessary for working a K9 unit.  K9 training is often a separate area of learning, that takes place after the officer’s “regular” police officer training program.  The K9 Unit is one of several law enforcement specializations that requires special training or a degree in law enforcement.

Police dogs are not only a partner to the officer; they are also part of that officer’s family.  A police dog usually lives with his trainer and the training process begins when the canine is still a puppy.  By beginning the training phase early, the officer can build the trust necessary for a lifelong partnership.  Once the basic training is completed, the dog and his handler are ready for more specialized trainings such as cadaver dog training.

The use of canines in crime solving is a fascinating and challenging aspect to the career.  K9 officers often state they could not ask for a better partner.  The canines can go into areas that humans cannot fit into.  When trying to detect the remains of murder victims, a trained cadaver dog is a very valuable resource.  Investigators who work with these highly trained animals have been able to close many cases due to the educated noses of their partners.