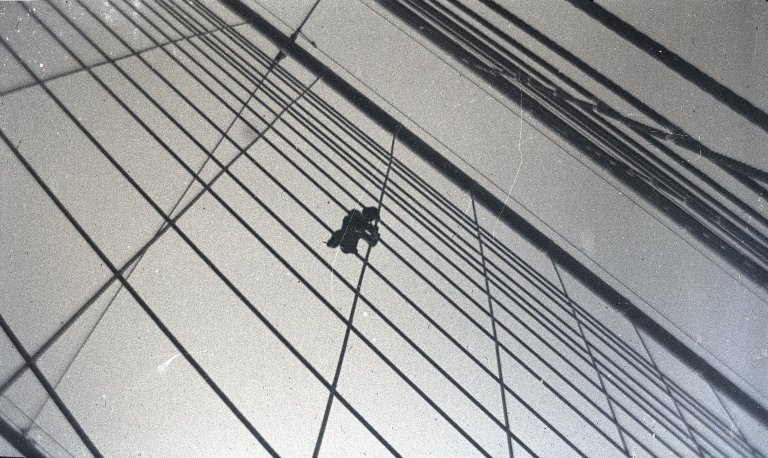 This photo “On Bridge (Painter)” by (George Bradford Brainerd) is similar to one (by Eugene de Salignac) among the NYC Archives’ online gallery.

Today, New York City’s Municipal Archives officially launched its online gallery. It took Archives’ staff four years to scan 870,000 of their 2.2 million images (dating as far back as the mid 19th century) to make them available online for the entire world to see. Crime scene photography is highlighted among the collection. According to Randy Herschaft and Cristian Salazar of the Associated Press, “The gallery includes images from the largest collection of criminal justice evidence in the English-speaking world, a repository that holds glass-plate photographs taken by the New York City Police Department”.

Among the crime scene photos, is one of two men dead, one lying on top of the other, at the bottom of a Manhattan elevator shaft. The image was taken on November 24, 1915 and tells the story of Robert Green and Jacob Jagendorf who attempted to steal expensive silks from the fifth floor before meeting their demise. Other images include a mug shot of mobster Charles “Lucky” Luciano and the corpse of Gaspare Candella found stuffed in a drum in Brooklyn.

Of course not all of the images in the online gallery are crime-related. The AP reports that there are 800,000 photographs of city buildings taken with 35mm film during the mid 80s. There are also images from the Depression era of laborers completing public works projects, bridges, street corner scenes and even some from the 1936 World Series. The Municipal Archives plans to continuously add photos to the gallery as well, potentially including some of the 720,000 photographs of city buildings circa 1939-1941.

For those interested in criminal justice careers and find themselves in New York, a visit to the Archives is well worth while. It houses several interesting collections including records from the Coroner’s Office (1823-1946), Court Records all the way back to 1684 until 1966 and District Attorney Records (1895-1971).

NYC’s Archives also has an intriguing collection of 6,000 “Bertillon” cards. These three-by-five-inch cards were first created by a police clerk in Paris, Alphonse Bertillon, back in 1879. According to the New York City Municipal Archives, “[Bertillon] calculated that there was a 268,435,454-to-one chance that two people could have fourteen identical measurements (height, length and width of head, length of left forearm, etc.)”. Law enforcement agencies across Europe and the United States adopted his successful system. The Bertillon cards at the Archives presents information on each suspect, including name, mug shot, birthplace, age, crime and of course Bertillon measurements.

As of this evening due to high traffic to the site, there seems to be some technical difficulties accessing the online gallery. But stay patient – it promises a wealth of images for those interested in history, architecture, sociology, art, genealogy, criminal justice and more.