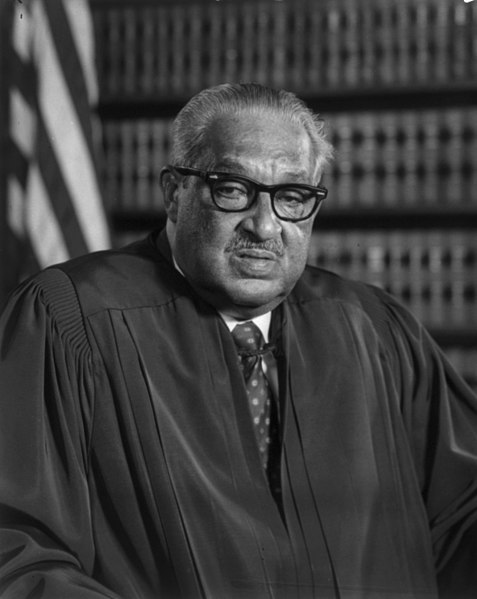 Thurgood Marshall, Associate Justice of the Supreme Court of the United States (1967 – 1991)

In our last blog post, we talked about how March is National Criminal Justice Month—a time to raise awareness about the occurrence of, response to and prevention of crime. One of the ways the ACJS (Academy of Criminal Justice Sciences) recommends individuals mark this month is “recognizing criminal justice professionals or criminologists who have contributed to criminal justice awareness.”

Taking their advice, below is a list of five individuals that fit this distinction. Some are renowned nationally or worldwide, while others may only be known in their communities. Some are no longer alive, while others are in the prime of their careers. Each has played a key role in raising awareness or acting as a role model within the criminal justice system.

A professor emeritus at the University of Wisconsin-Madison Law School, Herman Goldstein is known as the creator of the problem-oriented policing approach, a law enforcement method that has been incorporated all around the world. One way this approach may be described is that it looks at the causes of criminal activity rather than the symptoms. It also involves analyzing how problems are dealt with so that response strategies can be improved.

Thurgood Marshall (1908-1993) was the first African American to be appointed to the Supreme Court Justice. Before becoming an Associate Justice in 1967, Marshall was a very successful lawyer and served as chief counsel for the NAACP (National Association for the Advancement of Colored People). He had an amazing track record for the civil rights-related cases he argued before the Supreme Court, including his victory in Brown v. Board of Education (1954), the landmark case that declared the segregation of public schools as unconstitutional.

Inimai M. Chettiar is the Director of the Justice Program at Brennan Center for Justice (New York University School of Law). According to the Brennan Center, “The Justice Program seeks to secure our nation’s promise of ‘equal justice for all’…” Among the program’s top criminal justice reform goals are “ending mass incarceration” and “closing the justice gap for low-income Americans.” Chettiar’s accomplishments include helping create the country’s “Initiative to End Overincarceration” while attending the American Civil Liberties Union, and working as a researcher and policy reformer in various avenues, focusing on racial and economic inequality.

From November 2012 to February 2013, the YWCA of Richmond (Virginia) and UR Downtown organized an exhibit at the University of Richmond. Since the YWCA is the area’s largest provider of services to victims of domestic and sexual violence, the exhibit highlighted members of the community who are instrumental at raising awareness about these forms of abuse. Detective Mac Adams was the only law enforcement officer and male featured in the exhibit. “Major Crimes Detective Mac Adams didn’t understand domestic violence when he first started working as a city police officer,” states the Richmond Police Department’s Facebook page. “Now, 25 years later, he is well known in the community for all of his efforts working with victims and other agencies to stop the cycle of violence.”

Last year, Gene A. Beverly (a corrections officer at the Essex County Correctional Facility) was awarded New Jersey’s Correction Officer of the Year award. According to a press release issued by The County of Essex on July 30, 2012, Beverly works in a pod at the correctional facility where there are 128 inmates with special needs, from those who are ill to elderly. “He conducts himself in a firm but compassionate manner, and has earned the respect of his co-workers, supervisors and the inmate population,” stated the press release. “He previously was awarded the Essex County Teamwork Award, serves as a role model to younger correctional officers at the ECCF and is mentoring a 13-year-old male in his community.”

These are just some of the many criminal justice professionals that we can learn from and be inspired by. Who else should we honor? We’d love to hear your ideas!