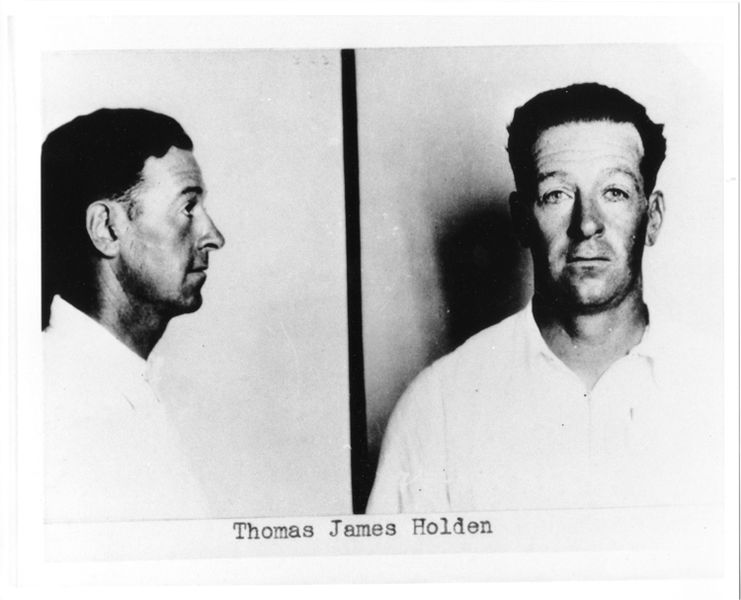 Thomas James Holden was the first fugitive to be placed on the
FBI’s Most Wanted List on March 14, 1950.

The FBI’s Ten Most Wanted List (Ten Most Wanted Fugitives List) was first implemented on March 14, 1950. It came out of a card game between J. Edgar Hoover (then Director of the FBI) and a newsman, according to John Miller, former FBI Assistant Director of Public Affairs. “A reporter for the International News Service (the predecessor to United Press International) asked the Bureau for the names and descriptions of the ‘toughest guys’ the Bureau would like to capture,” states the FBI’s Ten Most Wanted Fugitives FAQ page. The published newspaper story became so widespread that Hoover decided to create the Ten Most Wanted Fugitives program.Former FBI assistant director Miller appeared on a CBS This Morning show in April last year, just after Osama Bin Laden’s position on the Ten Most Wanted List was replaced by Eric Justin Toth (a former teacher who is still wanted for allegedly possessing and producing child pornography).

On the CBS show, Miller explained the criteria for deciding who goes on the list:

Here are some interesting facts from the Ten Most Wanted List’s 63-year history:

2. Of those who appeared on the list between 1989 and 2009, 54% were wanted for murder, 14% organized crime or drug cartel-related offenses, 11% for violent crimes other than murder, 10% for crimes against children, 8% for terrorism and 3% for bank robbery.

3. The first person to appear on the Ten Most Wanted List was Thomas James Holden on March 14, 1950. He was wanted for killing his wife along with her brother and step brother. He was captured on June 23, 1951.

4. The first woman to appear on the list was Ruth Eismann-Schier (wanted for kidnapping) on December 28, 1968. She was located and arrested on March 5, 1969.

5. Billy Austin Bryant was on the Ten Most Wanted list for only two hours on January 8, 1969. He was wanted for murdering two FBI Agents.

6. Victor Manuel Gerena has been on (and continues to be on) the Ten Most Wanted List for 28 years (longer than any other fugitive). He is wanted for armed robbery.

7. The public has directly assisted with capturing 154 fugitives on the Ten Most Wanted list.

8. The most recent fugitive to be added to the list is Edwin Ernesto Rivera Gracias on March 14, 2013. He is wanted for murder.

9. There have been at least four situations where members of the same family have been on the Ten Most Wanted list.

10. To decide who goes on the list, the 56 FBI Field Offices submit their recommendations to headquarters. There, special agents in the Public Affairs and Criminal Investigative Division offices (and possibly some members of the counter-terrorism division) review all the submissions and submit their selection to Executive Management for approval.