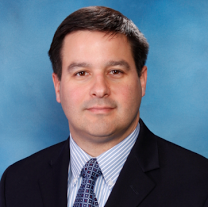 Joseph Rampolla has been a law enforcement officer for nearly 20 years. He currently serves as Captain and Executive Officer for a police department in New Jersey. He also travels across the country to teach law enforcement agencies about emerging technologies and cyber security.

Additionally, Rampolla runs Augmented Reality Dirt, a source of podcast discussions, news and blogs, followed all around the world. (Even if you do not know the term “augmented reality,” you undoubtedly have encountered it. For example, watching a football game on TV and seeing animated lines denoting plays; or using image recognition software on your smart phone to get information on various landmarks or destinations.)

In this interview with CriminalJusticeSchoolInfo.com, Rampolla talks about his career path, the types of computer crimes he’s encountered and the constant evolution of technology. He also offers some valuable advice to prospective students or even those who might like to change careers.

CJSI: What inspired you to start a career in law enforcement?

JR: I did not realize until a few years ago but I have always had an affinity for looking for clues and solving mysteries. I recently found an old game that I loved as a child called “Electronic Detective.” The game is an electronic version of the board game “Clue.” It dawned on me that these types of games helped to facilitate my interest in detective work, but as a geek. I remember listening to a police officer who came to my high school on career day. He talked about a job that could be boring at times but then the police radio crackles and your response stands between someone’s life and their death. I thought that was the coolest job a person could have.

I started out as a patrol officer but always wanted to use my geeky skills to get involved in computer crime which was growing in the mid 1990s.

CJSI: Were you interested and already immersed in the technological world even before you were assigned to the regional computer crimes task force in Northern New Jersey?

JR: I was a DARE Officer early in my career and spent a lot of time teaching parents about Internet Safety before anyone was talking about it. I knew in my heart that policing and technology were an important combination. I enjoyed following the digital trends and was a true geek before I had my opportunity to become a cyber-crime investigator.

CJSI: What sorts of computer crimes have you encountered throughout your career?

JR: I started out doing eBay fraud and small time Internet complaints. I then found my calling as a 13-year-old undercover girl online (not everyone can say that – LOL). I joke that I was an outstanding ‘teen girl’ but I started to learn how quickly predators would troll Internet chat rooms for kids. I then began working on child pornography distribution cases and was shocked at how much child pornography was being created and distributed around the world. It was sad to know that many of the kids in these photo/video recorded vile crimes may never be saved or identified. I then moved to undercover chat in Internet Relay Chat (IRC) which has origins since the beginning of email. I found horrible places where evil people collaborated about offending and sexually abusing children. I was able to infiltrate these areas and learn from these predators. They taught me more then any police training could ever do. We were able to arrest some of the most despicable human beings that ever walked the planet.

“One of my most proudest moments has been to have the opportunity to stand in the Jimmy Ryce Training Center at the National Center for Missing and Exploited Children and speak to district and military prosecutors from around the globe and share my experiences to help them protect children. I do not think there is a greater calling in life then to protect children and overall society from danger.”

I was able to use that experience and knowledge to train and teach law enforcement from all around the country. I taught computer labs and workshops for cyber-crime detectives and it was such a positive experience to know that the forces of good were branching out to communities everywhere to fight back against these predators. I then followed trends in virtual worlds where some creeps would create child avatars to simulate virtual child sex. It was extremely disturbing to know that someone could role play and have virtual child/baby sex, and the makers of virtual worlds did not seem to have a problem with it. I worked with a lawmaker in Washington DC to stand up and educate the Federal Trade Commission to put out a warning on virtual worlds for parents so they could be aware of online dangers.

I then learned about Augmented Reality (AR) which can take virtual worlds or virtual objects and bring them to the real world. I was embraced by augmented reality enthusiasts and I have become the biggest fan of the technology. I believe we can use this amazing technology for good while not giving an easy blueprint for criminals to victimize the innocent. As with any technology, it can be used for good and bad, so I have dedicated my life to promoting the good and fighting with other e-warriors to prevent the bad. It has been an amazing journey and I have met some of the most brilliant people in the world doing it. I believe we all can contribute in some way or form.

CJSI: What does a typical professional day look like for you or is there a typical day?

JR: I work for a municipal police department for my full-time job in the position of Captain and oversee the Detective Bureau. I wear many hats, but I try to bring all of my experience and love of law enforcement to help people in my community. I try and bring cutting edge technology to the local level and it has been a blast. We are unveiling one of the first police apps in NJ. We try and find new and enhanced ways to give important information to the public so they can stay safe. My dedication to the field of AR and emerging technologies has allowed me to dream of better ways we can serve the public. While most people take vacations or are off on the weekends, I get requests to share my knowledge and empower other criminal justice and social service professionals on the changing landscape of emerging technologies. One of my proudest moments has been to have the opportunity to stand in the Jimmy Ryce Training Center at the National Center for Missing and Exploited Children and speak to district and military prosecutors from around the globe and share my experiences to help them protect children. I do not think there is a greater calling in life then to protect children and overall society from danger.

Check out Part 2 of our interview with Joseph Rampolla!