What is Impression Evidence? 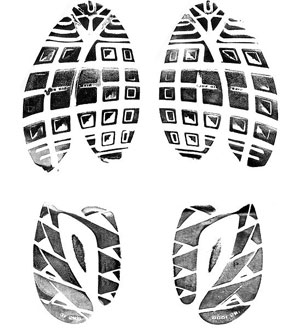 If a shoe impression does not bear any unique mark or pattern, it is considered only as class evidence (evidence that cannot pinpoint a specific person). But if the forensic footwear evidence bears a shoe defect or if it reveals a pattern of walking that can be linked to a person, then its presentation in court will have bearing on the case. To detect latent footwear impression, a crime scene specialist uses artificial light sources. Footwear impressions are recovered via adhesive lifters or gelatin lifters to get a two-dimensional form, or a plastic cast to get a three-dimensional form. 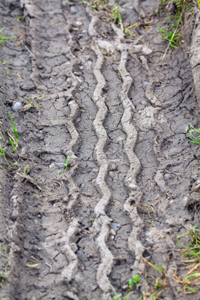 Tire impression evidence is of course, used to point to the culprit’s vehicle. Uniqueness by way of defects, skidding pattern, tire patching traces or uneven wear must first be established before the court dismisses the tire track evidence as class evidence. No used tires are alike thanks to amounts of thread wear, and the tire thread pattern are what crime scene investigators are paying attention to when they analyze this particular evidence.

A crime scene investigator must have a keen eye for detecting a bite mark on a dead body. Upon concluding that a bite mark has been impressed on the body, a forensic dentist will be called to measure and record the bite mark. This must be done immediately as bite marks loses its original impression over time. When the dentist confirms that it is a human bite, it will be swabbed for DNA. The serial killer, Ted Bundy, who confessed to 30 murders, was linked to two of his murders by bite mark evidence. When done right, the recording and analysis of a bite mark on a victim can provide a great deal of evidence in legal proceedings.

Tool Marks are defined in forensic science as impressions produced by an instrument on a surface. Crime scene investigators determine the nature of the tool by the indentation it leaves on the surface. Tool marks can be categorized as abrasion for friction type marks or negative impression for stamping type marks, some tool marks fall under both categories. Again, the forensics department should establish the uniqueness of the tool mark and link it to a particular tool and matched to the owner before it becomes an acceptable piece of evidence.

Forensic impression evidence plays a big role in recreating crime scenes and solving a case. A crime scene investigator must know how to detect and analyze the impressions to link them to a culprit. Careless collection of evidence, just like what happened in OJ Simpson crime scene evidence2, will result to inaccurate findings. A competent forensics investigator can detect the slightest hint of impressions and process them to solve a case.