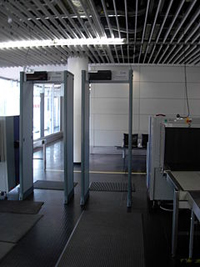 As the tenth anniversary of 9/11 soon approaches, a 60-day pilot project just began at Boston Logan International Airport. Some of the airport’s Transportation Security Association (TSA) officers have been trained to look for visual clues, such as facial expressions, breathing and voice pitch, to identify potentially threatening passengers. As of August 15, every single passenger flying out of Boston is required to talk for a few minutes with a behavior detection officer who has been trained to administer ‘chat downs.’

The officers do not focus on what passengers are saying necessarily, but what their bodies are doing during the small talk conversation. “The movement of the eyes, perspiring in a cool environment, the Adam’s apple movement. … I can’t be more specific because they are somewhat classified,” says Boston’s airport federal TSA director, George Nacarra. The entire list of visual cues remains classified for fear of terrorists learning and overcoming all of the physiological red flags.

Such a behavioral analysis program is already the standard practice in Israeli airports, but critics question its effectiveness for high traffic airports in the United States. The House Ranking Member of Homeland Security Bennie Thompson submitted a letter to the head of the TSA, John Pistole, attempting to put a halt to the screening pilot project. He worries that airport officers will racially, rather than behaviorally, profile passengers and he questions the scientific integrity of the observational techniques. The TSA plans to report on the statistical merits of the screening process after the trial period and has already targeted drug smugglers and fugitives attempting to board a plane.

The truth is reading body language and psychological cues are not a new crime fighting technique for the United States. For example, the FBI’s Behavioral Science Unit, popularly portrayed by the fictitious TV drama Criminal Minds, has been in existence since 1972.

If you are interested in a career in Aviation Security, and doing your part to provide an extra level of comfort and safety to your country’s borders, Homeland Security’s TSA offers numerous careers. You can start as a Transportation Security Officer and work your way all the way up to U.S.  Air Marshal or Federal Security Officer. As an airport security officer, you can receive special training to become a behavior detection officer, bomb appraisal officer or even a teacher of other officers. A Criminal Justice Degree, Homeland Security or Law Enforcement and/or previous security experience will lead the way to a fulfilling career path in protecting U.S. airports and the entire country.