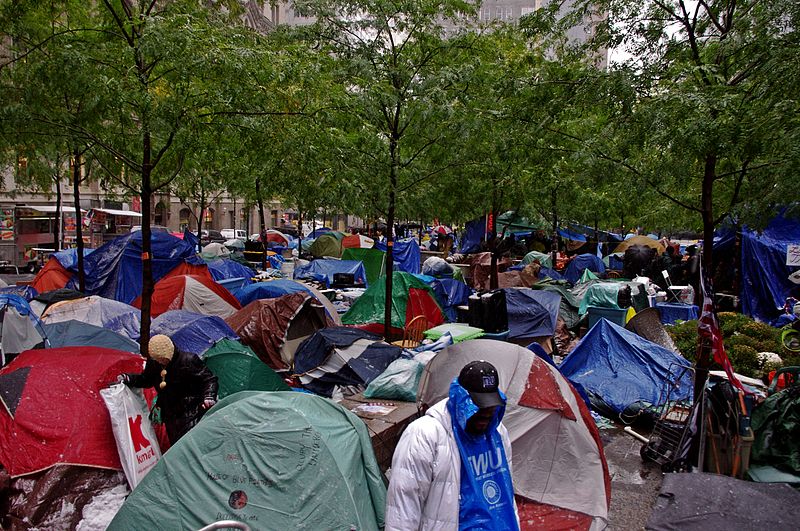 Evictions at Philadelphia’s Dilworth Plaza began at approximately 1am. Approximately 100 protestors were reported to leave with little chaos. But, later 52 people were arrested around the city for blocking intersections and highways; one was detained for allegedly assaulting a police officer.

Around the same time, approximately 1,200 law enforcement officers arrived at Los Angeles’ City Hall grounds to break up the Occupy camp. Originally Mayor Antonio Villaraigosa set the eviction date for Monday; his hopes were that some of the 2,000 full or part time occupants would disperse on their own before Wednesday morning. Villaraigosa praised law enforcement for not having to use pepper spray or tear gas during the final evacuation. “I couldn’t be prouder of what I believe is maybe the finest moment in the history of the Los Angeles Police Department,” he stated.

As tents were flattened, and some protestors hiding out in tree houses were taken down via platform lifts, almost 300 people were arrested for failing to leave the area. Once the area was rid of occupants, city workers built a fence around the former camp and removed 30 tons of waste.

A “Los Angeles Times” blogger for “L.A. NOW” reported accounts from protestors that some of the police officers used excessive force, including beating demonstrators that were running away from the site. Tyson Hedder, a photojournalist, is shown in a KCBS/KCAL video being shoved away by a police officer. When Hedder starts yelling, asking for the officer’s name, he is brought down and held to the ground by several policemen.

Los Angeles Police Protective League President, Paul M. Weber, responded to complaints of police brutality, stating, “It is unfortunate that our society has come to the place where a lawful command from an officer goes ignored. Oftentimes, as was the case at the Occupy L.A. camp, this sets in motion a regrettable series of events. As the League has maintained, when a dangerous individual refuses police orders to end the threat they are posing to the safety of officers and the public, they subject themselves to the consequences of their actions.”

Pam Noles from the National Lawyers Guild, who had been previously providing legal advice to protesters, also commended the LAPD for their nonviolence and said they brought on their “A-game.”

San Francisco’s Occupy camp has been ordered for an eviction by noon today. New York’s Zopatti Park, where the movement all started, was cleared on November 15.

A police officer job description entails maintaining peace and safety for citizens and their property. It involves making difficult decisions to ensure protection for the mass majority of people in their care. What do you think? Did the LAPD use reasonable measures? Would you like to become a police officer to uphold the law and provide justice and safety for your community in a fair manner? Consider completing police officer training to protect the valuable lives of your fellow citizens.