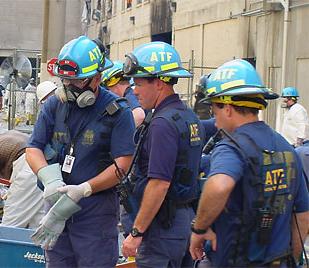 There are over 210,000 intentionally set fires each year, according to FEMA’s U.S. Fire Administration, in its November 2009 “Topical Fire Report Series”. These account for approximately 375 fatalities and 1,300 injuries annually, not to mention one billion dollars worth of property damage.

It is the job of fire investigators to find out what causes the fire and to find out who is responsible if a fire is intentionally set. These criminal justice professionals must combine knowledge from a variety of disciplines, including human behavior and science, to perform their detective-style work.

Investigators determine if a fire was intentionally set for criminal intent (arson) in various interesting ways. For example, they might look at the doors and windows of a building set on fire. Open entry-points could be a clue that a potential arsonist was trying to ventilate the space to encourage the fire to spread quickly. Alternatively, an intentional fire setter may have put barriers against front doors to impede fire fighters from entering the building.

Kathy Steck-Flynn of Crime & Clues adds that fire investigators might ask the first responding firefighters what color smoke was observed. Black smoke may suggest gasoline was involved, whereas grey or brown smoke may suggest wood was burning, for example. Investigators may also ask firefighters if they’ve noticed a familiar face in the crowd at multiple response sites –this could potentially be an arsonist returning to the scene of his or her crime.

Fire or arson investigators may work for local, state, federal or public agencies, including police and sheriff’s departments, fire departments, an Office of State Fire Marshalls, insurance companies, the ATF (Bureau of Alcohol, Tobacco and Firearms), the National Fire Protection Association and more.

In some cases, someone working for a law enforcement or fire rescue department works his or her way up to fire investigator status after receiving training from his or her employer or independently. In other cases, someone might take a fire science or another related degree first. In this case, it is a good idea to seek experience during or after completing your degree, such as volunteering for a local fire department, to gain real-world experience.

Since it takes a lot of skill, knowledge, experience and determination to successfully fulfill the duties of a fire investigator, the pathway to reaching this position should also be characterized by these qualities. Perhaps Chris Porreca, a supervisor with the ATF Boston field division’s Arson Explosives Group says it best (as quoted by Belfiglio): “We ask applicants whether they have worked fire scenes, signed up and gone to conferences on the local, state and national level, and taken the initiative to become a state certified fire investigator (CFI) to gain experience and knowledge”.