On the 9/11 Memorial Twitter page earlier today, Ellen Degeneres posted, “My heart is still with those who lost loved ones 11 years ago…” Slash (former Guns N’ Roses guitarist and current member of the Velvet Revolver) wrote, “Today I’m remembering the nearly 3,000 people taken too soon…” As of this afternoon at 2:30pm EST, the @Sept11Memorial Twitter page had over 21,000 followers. 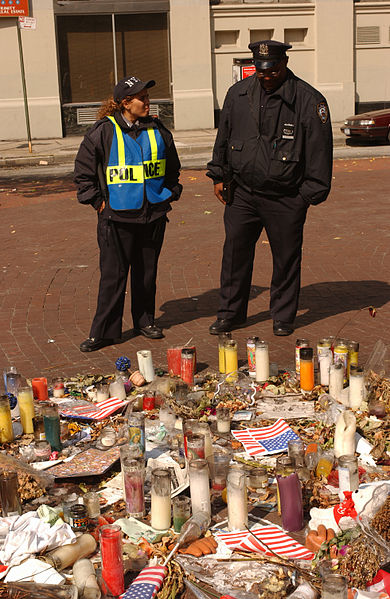 Across the country individuals are remembering the trauma that occurred at the World Trade Center buildings, the Pentagon and in a field north of Shanksville, Pennsylvania, eleven years ago. Some are reflecting in person; others are paying their respects virtually.

President and First Lady were present at a ceremony held at the Pentagon in Arlington, Virginia earlier today. “At the memorial garden at the Pentagon, President Obama and Michelle Obama participated in a wreath-laying ceremony to honor the 184 people who died when United Flight 77 slammed into the military headquarters,” wrote The New York Times’ Elisabeth Goodridge. “They were joined by relatives of the victims, members of the military and others”.

Numerous other commemorative events in and around the Washington D.C. area were planned for today, including the National Day of Service and Remembrance at Freedom Plaza. The annual event honors 9/11 victims, heroes and rescuers and combines music, food fare and speakers with mobilizing thousands of volunteers to engage in community service projects at schools and non-profits around the area.

According to New York Magazine, 2,819 individuals were killed during the September 11, 2001 attacks. Of the fatalities, 343 were firefighters and paramedics, 23 were NYPD police officers and 37 were Port Authority police officers. Additionally, hundreds of first responders had to go on sick leave due to respiratory problems or other associated health issues.

Today, numerous services were held across the country to specially pay tribute to law enforcement officials and emergency workers. For the first time this year, the New York Police Department honored each of its heroes that perished on a Twitter Page (@NYPDnews), which has over 40,000 followers. Once an hour, leading up to the in-person ceremony, a new name of a fallen officer was posted with a link to his or her photo and an outline of his or her successes on the job.

The Cambridge Fire Department in Massachusetts issued a protocol for all its firehouses today where at 9:58 am, uniformed members would stand at attention and recite the Pledge of Allegiance; at 9:59am, a 5-5-5-5 signal would be issued; and at 10:00 am, a minute of silence would be observed followed by reflective words remembering all fire, law enforcement and EMS personnel that were lost.

At Denver Colorado’s Civic Center, beginning at 11:30 am today, a remembrance ceremony was held to honor first responders and victims from 9/11 as well as those involved in the wildfires and the Aurora movie theatre shooting this past summer.

In an article published yesterday by KTVU.com it reads, “San Francisco fire stations tomorrow morning will commemorate 9/11 with the ringing of bells and the reading of the names of New York firefighters killed 11 years ago.” The article describes that a dozen or so fire fighters from the San Francisco Fire Station One actually went to Ground Zero in the days after the attack to assist.

Whether you were directly affected by 9/11 or observed from afar, perhaps you can find your own way – such as lighting a candle or taking a few minutes to be silent – to reflect on this eleven-year old tragedy as well as other tragedies that have taken place around the world.