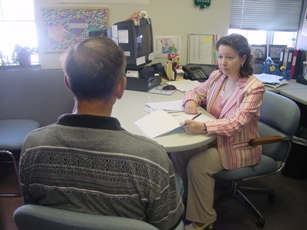 A Probation and Parole Officer (Missouri Department of Corrections)

We’ve all heard the term probation officer—whether it was on the news, in some popular crime drama or through personal experiences.

Simply put probation officers supervise offenders who are on probation—those who are still under court supervision but live in the community rather than being sentenced to prison.

But what does the job of a probation officer actually involve? Let’s look at some real-world examples.

Juvenile probation officer Ronaldi Rollins was supervising 20 teens at the time he was profiled by reporter Clay Duda for the Juvenile Justice Information Exchange (JJIE) (September 21, 2011). While probationers might sometimes go to Rollins’ Atlanta office, the probation officer would often travel to schools, streets, homes and vacant lots to find the youth he worked with. “A big part of my job is mentoring…And the best way to be a mentor is to relate to the kids on common ground,” said Rollins in the JJIE article, which also described Rollins following up with a teen who had broken probation to end up in a youth detention facility. Rollins told him he would recommend a 30-day sentence followed by community supervision. Rollins believed in the teen, who was no longer a member of a gang.

Another part of Rollins’ job was to ensure his probationers stay up to date on their studies. The JJIE article described how the probation officer was overseeing the Clayton County Virtual Alternative School where students completed their school work on computers at home.

As of May 2011, the Taunton District Court Probation Department in Massachussetts had nine probation officers. Each officer would “undertake as many as 50 supervised cases, another 40 or so OUI [operating under the influence] cases and at least 60 unsupervised, or ‘administrative,’ cases, the latter of which usually require no special conditions and often involve driving violations,” reported Charles Winokoor for the GateHouse News Service (July 22, 2011). Winokoor added that the probation officers would meet with their “maximum level probationers,” often in their homes, every two weeks. In addition to making regular visits, the Probation Department staff would get their probationers into essential programs, such as addictions treatment and vocational assistance.

Winokoor profiles probation officer Jason Avellar, who, as quoted in the article, said, “Instead of trying to put people in jail we’re doing the exact opposite…A lot of these people come from tough backgrounds and lack any kind of support system. We try to help them rebuild the foundation of their lives…I absolutely love my job. Every face, story and problem is different (and) sometimes just getting a thank you is more than enough.”

We’ve barely broken the surface of a probation officer’s career description….With the fulfilling reward of seeing probationers turn their lives around, it also has its share of challenges, and the profession is not for the faint of heart. But for those who are an ideal fit to be a probation officer, they will truly be making a positive difference in the lives of the people they supervise and serve.