The Zodiac Killer crimes from the late 60s are some of the most famous unsolved cases in modern American history.

The serial killer, known for his circle-cross ‘calling card,’ has been tied to four violent attacks in the San Francisco Bay Area. Three of these incidents involved attacks (shootings or stabbings) on couples in remote areas claiming the lives of David Faraday (aged 17) and Betty Lou Jensen (aged 16) in December of 1968; Darlene Ferrin (aged 22) in July 1969 (Michael Mageau, aged 19, was also a victim but survived the shooting); and Cecelia Shepard (aged 22) in September 1969 (Bryan Hartnell, aged 20, was also a victim but survived the stabbing). The fourth attack came on October 11, 1969, where a taxi driver named Paul Lee Stine (aged 29) was fatally shot.

According to ZodiacKiller.com, five other victims between 1963 and 1970 (who were either killed, kidnapped or went missing) are suspected of being tied to the Zodiac Killer.

“This is the Zodiac Speaking”, A Documentary

“This is the Zodiac Speaking” (2007) is a documentary directed and edited by David Prior. It offers a unique description of the Zodiac Killer investigation. It reveals intricate details of each of his crimes and features crime scene photos, old news footage and recent interviews with many of the law enforcement and other criminal justice professionals that directly worked the cases. The doc even includes interviews with survivors of the attacks, Michael Mageau and Bryan Hartnell.

The depiction of the murders from the late 60s offered an interesting insight into the forensics and investigative practices of the day. The detectives and patrol officers interviewed in the documentary are very honest and graphic in what they observed and uncovered, and are even open about how things could have been handled better (especially compared to today’s procedures that are enhanced by present day technologies). 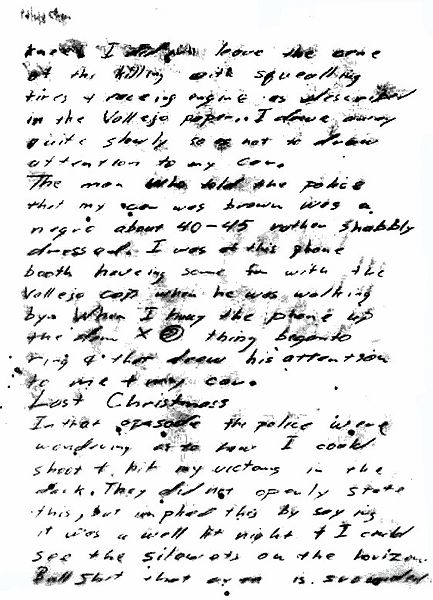 Just some of the other documentary scenes that stand out are when Nancy Slover (then City of Vallejo emergency phone operator) chillingly describes when the Zodiac killer called to notify that he had committed the murder; a photo of a piece of bloody shirt that belonged to victim Paul Lee Stine, said to be delivered with one of the Zodiac’s famous cryptic letters; and survivor’s Bryan Hartnell discussion with criminal profiler Sharon Pagaling Hagan over the car door that the Zodiac killer had marked (found at the crime scene where Hartnell had been a victim). During the conversation, Hagan says, “The question [has always been], ‘Why did he stop?’”

The documentary “This is the Zodiac Speaking” can be found at documentaryheaven.com, youtube.com and other online sources.