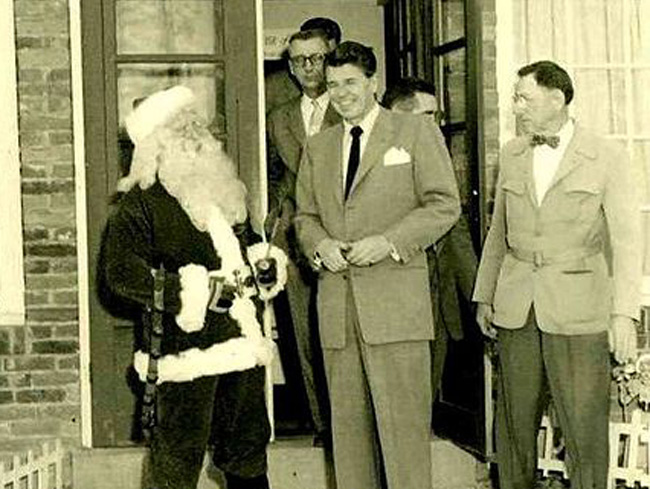 One hundred or more locales across the United States have names that foster a festive spirit all year round.

According to the Accuracy Project, nine communities have “Christmas” in their names, four are called Santa or Santa Claus and four are called Saint Nicholas! Other holiday-themed town names include Bell, Rudolph, Jolly, Noel, Mistletoe and even Humbug and Eggnog!

If you are a Christmas fanatic, maybe you’d like to visit or even relocate to one of these merry municipalities.  Let’s take a closer look at just a few of these places and their yuletide traditions, as well as some of their criminal justice departments.

Santa Claus, a town of approximately 2,500 people in Spencer County, Indiana, was recently named one of 2013’s “10 most Christmassy destinations on the planet” by CNN.

According to Voice of America News, Santa Claus’ town hall has a carillon (assemblage of bells) that plays Christmas carols all year round and some residents never take their holiday decorations down.  10Best.com (USA Today Travel) adds that the town has the world’s only post office named Santa Claus and so hundreds of seasonal “elves” are brought on board to reply to thousands of letters.

In Santa Claus there are Christmas-themed attractions at various times of year like the Holiday Foods grocery store and during the warmer months, the Holiday World Theme Park; in December the town erupts with a multi-week Santa Claus Christmas Celebration.

“Santa Claus, Indiana, is a complete town, with a Santa Claus police department, Santa Claus fire department, Santa Claus hardware store and three nice lakes: Lake Holly, Christmas Lake, and Lake Noel,” states Voice of America News. According to the Town of Santa Claus website, the Police Department and Volunteer Fire Department offices are located at 90 Holiday Boulevard (the Town Hall). The Police Chief is Joey Brown (he is joined by at least four deputies and four reserve officers) and the Fire Chief is Ed Hagedorn (he is joined by two assistant fire chiefs).

This Alaskan town is located 1,700 miles south of the actual north pole, but it has adopted a 365-day holiday spirit, from installing candy cane-shaped street lights and naming streets such monikers as Kris Kringle Drive or Santa Claus Lane to hosting holiday-themed events at various times of the year. According to Country Living, the town “trucks in 2.2 million pounds of ice to build its annual winter wonderland of frozen sculptures,” called Christmas in Ice, which this holiday season is displayed until January 7, 2014.

The North Pole Police Department (NPPD), headquartered at 125 Snowman Lane, consists of Police Chief Steve Dutra and at least one lieutenant, three sergeants, one detective, eight officers, one reserve officer and one evidence custodian.  According to the NPPD website, career opportunities “do arise from time to time” for civilian and commissioned positions (they accept applications and keep them on file for a year)’ those looking for valuable experience can also apply to volunteer with the North Pole Police Reserve Association (NPPRA). “It is a great way to learn the law enforcement profession with a ‘hands-on’ approach,” states the NPPD about the reserve association. “We have had many NPPRA officers go on to become full-time officers in both our police department and other police departments.”

Additionally, if you check out the City of North Pole main website, a current job opportunity is listed for Administrative Hearing Officers open to attorneys licensed to practice in Alaska.

In June of this year, Garland was one of the winners of the Best Recurring Special Event category as part of the 2013 TAMI Awards (Texas Association of Municipal Information Officers). Specifically the Dallas County town was recognized for its annual Christmas on the Square. This year’s event featured an enormous Christmas tree lighting, ice carving demos, train rides, snow tubing, Santa, performances by local choirs, shopping and festive refreshments. Garland also hosted other holiday events this December, including a theatre production of “Dashing Through the Snow” and a free screening of “White Christmas.”

In November 2013, Law Street released its list of top 10 safest American cities. For populations over 200,000, Garland ranked #9! Law Street credited the city’s low violent crime rate to its police officer ratio (1 officer for every758 residents), its “community-oriented population” and its public safety initiatives “including Neighborhood Crime Watch and Crime Stoppers.”