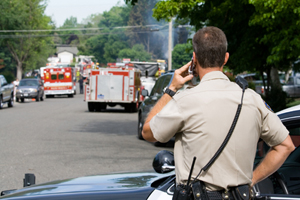 Police officers, who play a central peacekeeping role in our cities, ensure the safety of citizens, their lives, and property. They possess a thorough knowledge of laws and are trained to act quickly, decisively, and appropriately in typical law enforcement situations as well as in emergencies. The area police officers patrol on a regular basis is called a “beat”, and the purpose of a beat is to provide a regular presence of law enforcement while allowing officers to become familiar with the characteristics of that particular area. When a situation requiring police intervention occurs in their assigned area, there is a familiarity with the terrain and the neighborhood culture, which makes their jobs more efficient and effective.

When officers observe suspicious activity, they must investigate, and occasionally pursue offenders on foot in order to apprehend them. While most patrols are done in a police car, some use other methods of transportation such as motorcycles, bicycles, or horses. There is also paperwork and records that must be kept. Because police officers apprehend criminals who will most likely go before a judge, they must maintain detailed records for each incident.

In addition to being a patrol or general police officer, there are many other specialized roles in law enforcement and police work such as:

Detectives hold a specialized role in law enforcement and are much like police officers, except their job is more focused on investigations and fact gathering, and they do not patrol. K-9 Units have police officers who work with highly trained dogs in order to apprehend criminals, locate missing persons, drugs, explosives, and bodies. Not only do K-9 handlers have the gratification of working with their dogs every day, they are allowed to keep them at home when off duty.

SWAT Teams are another specialized role in law enforcement. SWAT stands for Special Weapons And Tactics, and is defined as a police or military unit specially trained and equipped to handle unusually hazardous situations or special missions. Two examples of circumstances when a SWAT Team would be utilized are when suspects take hostages or barricade themselves, and when there is a need to serve high risk warrants. Because these are highly sensitive and dangerous situations, members of SWAT Teams require special training and weapons beyond what is usually provided for police officers.

Similarly, Air/Helicopter or Aviation Units also provide specialized support to police officers, but from above. With their bird’s eye view of what’s happening on the ground, air support is invaluable in pursuit situations, especially when the suspect is considered armed or dangerous. The pilots are also trained police officers and are able to communicate with air traffic control, other aircraft, and ground units all at the same time.

Another specialized role in law enforcement is hostage negotiation. Once a police officer has put in a certain amount of years on the job, he or she can begin training to become a hostage negotiator. As with other specialized roles, there are certain classes and special training required to be a hostage negotiator, but the ability to maintain a cool head, suspend judgment, and listen grievances is crucial. So, if you dream of becoming part of a K-9 Unit, SWAT Team, or any other of the aforementioned specialized roles, you usually must first serve as a police officer for a given amount of years in order to gain the experience and knowledge necessary.

What are the characteristics of a good police officer?

A good police officer should be loyal, honest, brave, hardworking, able to communicate effectively, understanding yet firm, must respect authority enjoy working with people, and have a high level of integrity.

Will I work with a partner?

What are the working conditions of police officers?

While the working conditions for police officers can be stressful, their jobs are highly rewarding. Occasionally, officers will encounter highly dangerous individuals and situations and may need to use their guns. Proper training, skill, and knowledge will go a long way in abating danger and diffusing situations.

What Does “Vice” mean?

Will I need to be on call at all times?

No, you will not need to be on call at all times, but you will be expected to behave respectably and with utmost integrity even when off duty. Also keep in mind that while you may not be on call, an emergency may arise in which all personnel are needed. However, these situations are rare, and yes, police officers do lead normal, relaxing lives when off duty.