We’ve had the privilege of interviewing Detective Suzie Ivy, Author of Bad Luck Cadet & Bad Luck Officer. The back cover of her book sums up her situation: 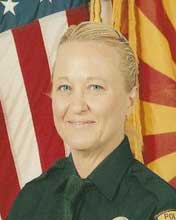 At the age of twenty-five you have your whole life in front of you. When you’re forty-four years old, forty pounds overweight, and laying in bed with a broken hip, what do you have? Depression, red wine, and no future, or so Suzie Ivy thought.

An advertisement on a drugstore bulletin board changed Suzie’s thinking and lands her in the police academy and her adventures as the first female officer in Small Town, Arizona.

Det. Ivy: When I was 14-years-old I went to see my high school guidance counselor, and told her I wanted to be a police officer. She said it was not a proper job for women. I believed her but never forgot my dream.

Pursuing this in your mid 40’s, being female, being out of shape and recovering from an injury. Some big hurdles! My hunch is that most people wouldn’t consider it. What made you decide to do this and how did you deal with the physical and psychological challenges of your situation?

Det. Ivy: I grew older and realized what could have been. Something in me decided why not? I’m stubborn. I don’t quit, and never have. Did I mention I’m stubborn? The physical aspect was the hardest for me and I lived in fear that my body would give out. The police academy is not for sissies.

While reading your book, I was struck by several moments where the cards were stacked against you at the academy. Most people would have thrown in the towel. Tell me how you got through this?

Det. Ivy: I must go back to stubbornness but also the longer I was in the police academy the more I realized how badly I wanted it. Dreams are like that and sometimes you cannot give up even when you are at your lowest. If you give up on the streets as an officer, you can die. This job is for the people that will continue fighting.

What were some of the most challenging aspects of your initial training at the department?

Det. Ivy: I was the first female officer and I had to prove myself over and over. This isn’t necessarily a bad thing. I don’t want an officer at my back that is not capable of helping me. Why should they want me if I’m not capable? Even after the rigorous training at the academy I had so much to learn about life in blue and working the streets. Every day is challenging but most of all I learned to appreciate life and my family.

What was the most challenging and/or rewarding case that you’ve worked on? Can you tell us a little about it?

Det. Ivy: I was the lead detective on a case involving a missing sixteen-year-old boy. He was dead by the time his mother reported him missing but with the help of my Sergeant we hit the pavement, called in every favor owed to us on the street, and put the case together. After we arrested the man we knew was responsible, I received a call from an old girlfriend of the suspect. She lived in a different state but had information about another unsolved homicide in our county from two years before. I jumped on a plane and interviewed her. That homicide led to another and our suspect was charged with three murders.

At this time the FBI was called and I worked hand in hand with them. This will probably go down as one of my saddest cases but also the most incredible. There is a lot said about jurisdiction and large agencies taking over. We were way up in the mountains recovering one of the buried bodies. The lead FBI agent asked me to glove up, and help dig. They didn’t care that I was from a small Podunk town. They asked for my help and I assisted in uncovering the body. I walked a one hundred yard grid line with twenty FBI agents on each side of me, and I logged hundreds of photos with their photographer. I learned so much from this case and use those lessons every day.

I know you specialize in sex crimes. What are some of the unique challenges working with this type of crime?

Det. Ivy: People have the mentality that it only happens to others. There is no social, economic, religious, or racial designation when it comes to child molestation. It’s a family tragedy that has so many unique aspects of grief, guilt, and blame. In adult sexual assaults the victims mostly know their attacker. Shame and guilt make it emotional and heartbreaking when dealing with victims. I began seeing a very good therapist a year after I started working almost exclusively in sex crimes. It’s not a macho cop thing to admit that I needed emotional help but I’ve never claimed to be a macho cop. I will gladly leave that designation to the men and women working traffic and street duty. My therapist counsels children of sexual violence. She tells me we help each other and she never judges me when I make very un-cop like statements.

At one point, Spike, an officer you were training with said to you, “I’ve worked with two types of female cops. The ones that think they need to fight all the time in order to prove themselves and the type that hide behind their male counterparts if things get hairy. Which one are you?” There was also another incident where a male officer made the statement, “What, you’re not going to critique her like everyone else”, as if you were getting special treatment because you were female.

There were obviously some challenging perceptions you had to deal with while working and training with your male counterparts. What advice would you give our female readers about the choice to pursue a career in law enforcement in light of these challenges? . . and can you elaborate on your feelings about the two above statements/critiques you got from your fellow officers?

Det. Ivy: For females wanting to pursue a career in law enforcement, lighten up. The job is stressful and demanding. Men react different in these situations than women. Also, remember I work sex crimes and I talk and study sex continually. As a female when the adrenaline dump happens, my hands begin shaking, and I realize how close to death I was; my tears fall. For men it’s different, their life affirming confirmation is sexual. The jokes will start, the nervous laughs, the inappropriate comments. This is not true 100% of the time but 90% of the time it is. It’s taught me a lot about gender response and I stopped taking offense years ago.

Spike was rough on me and I continue to have a love, hate, love relationship with him. He’s old school cop but once I got under his skin he became my best advocate. He can say anything he wants about me but others had better watch out. We all need a Spike in our lives. If you listen to their “good old day” stories you learn a lot.

There are good cops and bad ones just like in any profession. The good ones learn from their mistakes, accept and take responsibility for them and move on. The bad ones blame others; she gets special treatment because she’s female or because he’s black. Bad cops never take responsibility for their actions. They don’t usually last more than five years as officers. They also hate their jobs and are usually miserable at home. Be a good cop!

I was struck by so many of the insights you provided in your book into the real world of an officer and detective. What are some of the most glaring differences between the TV CSI perception and the realities of police work?

Det. Ivy: Since becoming an officer I mostly stopped watching these shows. It was just too hard on my husband when he couldn’t hear the dialog because of my screaming and yelling. These shows are make-believe, and their number one priority is to entertain. I do not entertain when I’m at a crime scene. Sometimes I haven’t had time to brush my teeth and do more than throw my hair in a ponytail. Processing a crime scene takes hours and sometimes days. Lab results take months. I could actually write a book about this subject but I’ll stop here because I’m starting to scream and yell.

You mentioned that there were mixed feelings from your family about becoming an officer. How did you deal with this and how did you balance your work/life situation?

Det. Ivy: This is my life and my dream. My children have their own. Two out of the three support my choice 100%. My husband supports me endlessly and he is my greatest strength. I’ve also learned the fine art of eye rolling when my son turns his back. I hope I’m alive when he’s older and decides to fulfill one of his dreams. It’s all about the “I told you so.”

What made you decide to begin blogging and writing?

Det. Ivy: I needed a balance and a way to bring humor back into my life. I love to laugh, tell stories, and enjoy each day. The interaction with my readers lightens my heart. They pushed me and keep pushing me to write more. I never thought anyone would read my blog but I wanted a journal to describe the day to day life of a middle-aged opinionated female cop. I am blessed in so many things.

Can you give us a sneak peek into your next book, Bad Luck in Small Town?

Det. Ivy: I’m having fun with this one. It’s an actual homicide investigation I worked. It’s strange and quirky. I feel it gives a very close inside look at real investigations. It taught me valuable career lessons. Sorry I would love to say more but I can’t.

Bottom line, what are your top “words of wisdom” for females and those who are older who want to realize their dream of working in law enforcement?

Det. Ivy: We need more women and also older men and women in law enforcement. We bring a level of life experience, nurturing, and perspective that is unparalleled in our male counterparts and/or younger generations. This job is the most rewarding career you could ever know. Cops are the largest gang in the world. We wear our colors proudly and we will always have the other’s back.

** Criminaljusticeschoolinfo.com would like to give a special thanks to Detective Suzie Ivy for taking the time to conduct this interview. 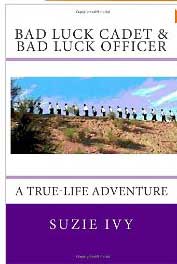 Anyone who is looking for a real world account of attending Police Academy and taking the necessary steps to become a law enforcement officer would benefit from reading Ms. Ivy’s vivid personal story. Female’s and those who are older will especially appreciate her struggles and triumph.

She describes her adventures in a down to earth and engaging tone, often humorous, which at times made me laugh out loud and at other times made me well up with tears.

Her writing style is addictive, making me excited to turn the next page. She brings the real world characters of Small Town, AZ to life. When I finished her book, I got up the next morning and went for a jog – I was inpsired!