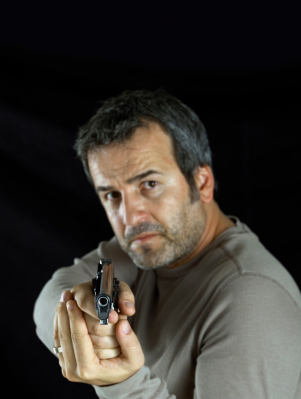 American citizens have always been concerned with the pursuit of justice and sometimes caring citizens go a step beyond merely caring about justice and decide to make a career out of catching criminals on their own without being official members of a law enforcement team. These individuals are called bounty hunters. There is a lot of appeal to chasing down lawbreakers for money as Hollywood has proven with its usage of bounty hunters in cinema. Clint Eastwood in the Good, the Bad and Boba Fett from Star Wars are just a few famous examples of Hollywood bounty hunters. But perhaps the most famous bounty hunter of all is Duane Chapman, better known as Dog the Bounty Hunter from his reality television series. If you have a desire to become a bounty hunter, you must, like Dog, have a thirst for excitement combined with training and education on skip tracing, handgun use, surveillance, and special techniques for hunting down and capturing those who attempt to skip bail.

How to Prepare To Become a Bounty Hunter

It’s important to be physically fit and have the ability to defend yourself in order to prepare to become a bounty hunter; Some self-defense techniques (including most of the martial arts) take years to learn and properly execute so you need to start on this as early as possible. The more exposure you have to self defense training and physical fitness, the better.

Start researching and studying how to be a bounty hunter (if you’re reading this article, you’re probably already on step 2 so congratulations!). The ways to become a bounty hunter are listed in depth in the bounty hunter training section. Remember to determine if bounty hunting is legal in your state and any special requirements needed, such as licensing.

Bail agencies don’t want to gamble on an unknown bounty hunter so making connections are very important in the early stages of your career. Get to know some bondsmen and become friends with them. If they ever have a bail jumper, they might just call you to help recover the fugitive. Additionally, having friends in law enforcement gives you access to resources that most other bounty hunters don’t have.

Now that you have the knowledge, skill, and connections to get work, it’s time to take the licensing test (if your state has one) in order to officially become a bounty hunter. This is covered extensively in the Bounty Hunter License section.

Before you become a bounty hunter, you’re going to need all the necessary equipment. It would be a little embarrassing for you to show up at the fugitive’s house and try to arrest him without a pair of handcuffs, right? So splurge a little and get items like: taser, Mace, firearms (if you’re legally permitted to own them), surveillance equipment, safe and inconspicuous transportation (reliable car), and anything else relevant to bounty hunting.

Set up your business

If you’re going into bounty hunting as an independent contractor, there will be a business aspect to your career that you might not have expected. It’s important to have marketing knowledge and maybe even managerial experience. Bill Hunt, a California private investigator and fugitive recovery agent (aka bounty hunter), explained that many people forget about the business aspect of this career and won’t succeed if they neglect to take this into consideration. One way to help yourself out is to make a website to market yourself. Here’s Bill Hunt’s website as an example. www.ocdetectives.net

CriminalJusticeSchoolInfo.com would like to thank Private Investigator & Bounty Hunter, Bill Hunt for allowing us to interview him for this article.

Bill Hunt – OC Detectives, Inc.Bill Hunt is the CEO and Qualified Manager of Hunt Private Investigations, which is a full service private investigations agency. Bill has over 28 years of military, law enforcement,
security and investigative experience, including locating and facilitating the apprehension of bail fugitives.

Read more about Bill at www.hunt-investigations.com