Of course, the biggest question you all have is: “Wow, this sounds really cool, but how much would I get paid?” Well, there’s no easy way to determine bounty hunter salary but it depends heavily on where you work and how you operate. A regular independent bounty hunter works on commission. He captures a bounty that has yet to pay for his bail and returns them to the bail agency. The bail agency then pays a percentage of the bounty’s bail, which makes up the bounty hunter salary. The percentage changes based on location but the chart generally looks something like this:

* One reason why international recovery percentages are so much higher than the others is because of the added risk involved with undertaking an international fugitive recovery operation. As I’ve already pointed out, bounty hunting is illegal in almost every country in the world and if a police officer from one of those countries catches a bounty hunter apprehending a fugitive, then the bounty hunter is charged with the criminal act of kidnapping and thrown in prison. The most famous example is, once again, Dog the Bounty Hunter.

While there is not a specific degree requirement for bounty hunters, obtaining a criminal justice degree, criminal investigations, or law enforcement degree will help you get the knowledge you’ll need to be successful. It may or may not have an impact on your salary, but it will surely increase your credentials as a professional bounty hunter and bail enforcement agent. 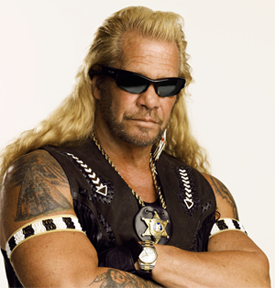 In 2002, he was brought to trial after being accused of drugging and raping 3 separate women. Luster fled to Mexico to escape the trial and was convicted in absentia on 1986 of 1987 charges.

Dog the Bounty Hunter followed Luster to Puerto Vallarta, where he was hiding out, and, with the help of his son, successfully captured the escaped fugitive on June 18, 2003 before bringing him back to the US.

Dog was later charged with deprivation of liberty by the Mexican government and was arrested by US Marshalls on their behalf in 2006. After nearly a year of fighting extradition charges and contacting US government officials, Dog finally had his case dismissed when a criminal court in Mexico ruled that the statute of limitations had expired.

Fortunately this incident ended peacefully and without Dog serving any jail time, but not every bounty hunter is so lucky. Other bounty hunters have been jailed for years by carrying out their jobs in similar fashion.

Lastly, some bail agents choose to hunt down bail jumpers themselves so they don’t have to pay some of their own commission (bail agents are paid in commission off of the bail that their clients pay to the bail agency) in order to retrieve the bounty. This means that bail agents will get a higher percentage commission than either of the previous two bounty hunters because they work in-house and save the company the extra expense of hiring outside bounty hunters.

This dependency on commission means that sometimes you can go weeks without a paycheck and sometimes you can capture a single bounty and get thousands of dollars. Because of this, bounty hunter job outlook for someone who strictly performs bounty hunting can be inconsistent. Those who manage their businesses well can effectively navigate the financial aspect of this feast or famine effect. The number of bail jumpers has remained at a fairly constant level and it is unlikely that the industry will grow substantially in the future. Additionally, the industry is at an all time employment high due to interest being generated by Dog the Bounty Hunter and such employment influx means that bounty hunting is becoming a highly competitive field. Because of this, bounty hunters need to find some way to distinguish themselves from the competition; some double up by getting a secondary job. In terms of bounty hunter job outlook, the optimal choice would be a secondary career in private investigation because it is a natural complement to bounty hunting but provides steadier employment and makes you look more reputable to clients when they wish to hire you to recover fugitives.