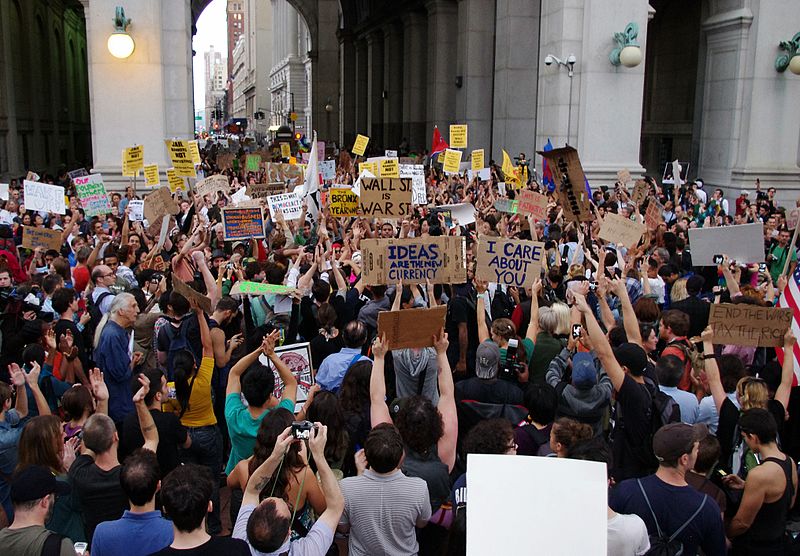 Corporations Are Not Individuals

These are some of the words inscribed on placards held by protesters participating in Occupy Wall Street. It started on September 17. Called for action by the anti-consumerist magazine Adbusters, hundreds of demonstrators set up camp in Zucotti Park (now dubbed Liberty Square) in Manhattan a few blocks away from Wall Street. The movement has swept across the nation in cities, such as Washington D.C., Denver, Los Angeles, Chicago, San Francisco, Boston, Asheville, Tampa and Portland. On Saturday, October 15, Occupy Wall Street will become a global phenomenon as events are planned for major cities in at least 25 countries, from Canada to Australia, Hong Kong to South Africa and Ireland to Buenos Aires. A Facebook group has been created to plan an occupation outside the London Stock Exchange from October 15 to December 12.

The media and politicians have been on both sides of the fence on how they feel about the movement. From Obama saying, “I think it expresses the frustration the American people feel” and House Minority Leader Nancy Pelosi saying, “It’s young, it’s spontaneous, it’s focused and it’s going to be effective”; to “I think it’s dangerous, this class warfare,” said by Republican presidential candidate Mitt Romney, views on its effectiveness and motives are mixed.

Critics of Occupy Wall Street state that demonstrators’ demands are not clear. According to Kim Mackrael of The Globe and Mail, “the movement is attracting a global following of people who are frustrated with a political system they say favours corporations and the super-rich”.

In his short film Why Occupy Wall Street?, DC Douglas attempts to answer this very question. The underlying message is since investments banks, corporations and major financial institutions became de-regulated, a slew of economic crises have occurred at the expense of “the 99%”, the “common people”. One clip showcases Harvard University Law Professor Elizabeth Warren saying that we’ve ended up “in the biggest crisis since the Great Depression”.

If you are inspired to make a difference for the better of all Americans and the world, whatever your stance is on Occupy Wall Street, consider a career where you can make a positive, direct impact on policy. A public administration degree, a public policy degree or a political science degree can help pave the road to a variety of such careers, from lobbying and policy analysis to international relations and non-profit service.