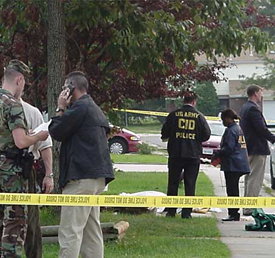 “We’re gonna need a ballistics expert on this one. . . copy?”

After earning your degree in criminal justice, forensic science, or crime scene investigation, you will be equipped to begin your journey into the world of CSI. Your crime scene investigator career path may start in one area, but then later branch out into different specializations; there are many roles to be played and specific expertise needed in CSI.

Forensics or CSI – Which is which?

Note: Forensics is closely related to crime scene investigation. In most departments, the forensics staff does not work at the scene of the crime, but instead, works in a lab or office within the department after evidence is transported from the crime scene. Learn more about the various roles and education options in forensics.

You can choose from different crime scene technician specializations:

CSI in Large vs. Small Jurisdictions

Some of the smaller jurisdictions are seeking a “jack of all trades” within the realm of CSI and prefer employees who have some experience in multiple facets of CSI, while others are seeking very specialized roles to be played. As a crime scene technician, you will be directly involved in gathering physical evidence at a crime scene. This crime scene investigator career allows you to utilize several techniques used in collecting evidence. As a crime scene technician or evidence technician in most jurisdictions large and small, you will be tasked in recovering trace evidence, lifting fingerprints and other impressions, collecting blood and other fluids, or photographing the crime scene.

“Jack of all trades or highly specialized? It may depend upon the size of your jurisdiction”

For those who want to specialize in the examination of trace evidence, a forensic science degree or a criminalistics degree is recommended. You could also be in charge of preserving the collected pieces of evidence and ensuring that they are transported to the lab untainted. Storing evidence is an important and many-faceted job, depending on the specific evidence being collected and stored for later examination. How many times have we heard of evidence being disallowed in court due to improper collection and transportation?

Being in a more analytical role during post- evidence collection tends to be a more traditional forensic science career, which is sometimes distinct from the CSI responder and often requires a specific forensic science degree. Depending upon the type of crime, there may be a need for individuals who are more forensics oriented to be on the crime scene and conduct analysis on the spot or to help determine what is of highest priority for collection and later analysis. As a forensic science technician, you will be in charge of identifying, classifying, and analyzing evidence. You will be responsible for running different types of tests depending on the nature of evidence collected; for instance, a ballistic test will determine what type of firearm was used in a crime scene, and performing a DNA analysis to fiber, hair, tissue, blood, etc. can link a suspect to a crime. Also, this role makes you a possible candidate to testify in court.

If you want to assume a supervisory or a managerial position in the field of crime scene investigations, you may want to pursue a masters program in forensics and/or crime scene investigation. Furthermore, there are training programs available for CSI professionals so they can gain additional skills and learn the latest CSI technologies that are needed for the job.