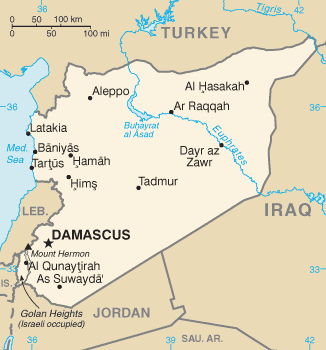 A spotlight shines on President Barack Obama as he seeks Congressional and international support for a military response in Syria.

Will there be a U.S. Military Strike?

There was no consensus reached at the recent G20 summit. However 10 countries plus the U.S. basically agreed that the Syrian government, and its President Bashar Assad, was responsible for the chemical attack outside Syria’s capital of Damascus on August 21.

On the other hand, Russian President Vladimir Putin concurs with his ally President Assad that the attack actually stemmed from Syrian rebels. Russia is thus among countries opposed to a possible military strike in Syria, warning that: “such targeting could release toxic chemicals and give militants or terrorist access to chemical weapons,” reports the Associated Press’ Josh Lederman (September 6, 2013).

Those countries that agree that Assad is to blame for the chemical attack (Canada, Saudi Arabia, Turkey, Australia, Japan, South Korea, France, Spain, Italy, and the UK) do not necessarily back a military response, at least not right away. Yesterday, the European Union agreed that any such response should not come before the United Nations has released its inspectors’ report.

President Obama will address the nation on Tuesday night regarding a possible U.S.-led military strike that is “limited and proportional,” states Lederman.

Meanwhile, those working in or interested in cyber terrorism and information security, have been perhaps taking note of Syria for some time—specifically at a group known as the Syrian Electronic Army (SEA).

The group of hackers claim that, although they operate to support and promote the Assad regime, they have no official ties with the Syrian government. However, “it is widely believed that [President Assad] is supporting the operation,” reports International Business Times’ David Gilbert (September 3, 2013).

The FBI has recently issued an alert regarding the SEA. “The Syrian Electronic Army (SEA), a pro-regime hacker group that emerged during Syrian antigovernment protests in 2011, has been compromising high-profile media outlets in an effort to spread proregime propaganda,” reads an advisory from the FBI Cyber Division, dated August 30, 2013. “The SEA’s primary capabilities include spearphishing, Web defacements, and hijacking social media accounts to spread propaganda. Over the past several months, the SEA has been highly effective in compromising multiple high-profile media outlets.”

The first famous work credited to the SEA was interfering with Harvard University’s website in September 2011. It appears their actions have increased throughout 2013, including hacking websites, social media or other accounts of organizations such as Human Rights Watch, the BBC, FIFA, the Associated Press, the Turkish Ministry of Information, the Financial Times and The New York Times.

Last week, the SEA allegedly compromised the U.S. Marines’ website (Marines.com), redirecting visitors to a page that encouraged soldiers to join forces with Syria because they have a common enemy—al Qaeda—and that they should refuse orders from the U.S. government.