Unlike most other law enforcement, a Sheriff is elected, usually for a term of four years, often with the option of running for office again. Most voters prefer that their Sheriff has a law enforcement background, but it is not required in every case. Like a pyramid structure, the Sheriff is at the top, with a certain number of subordinate supervisors the Sheriff oversees, and those supervisors in turn oversee a greater number of employees, mostly Sheriff’s Deputies. This is another example of how having a law enforcement education will give you a better chance of gaining employment in a competitive environment. 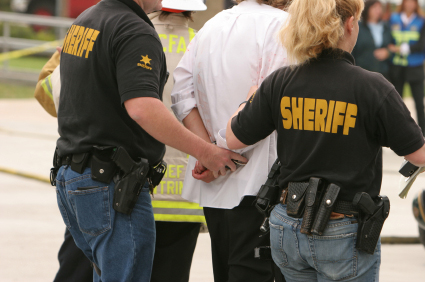 Sheriff’s Departments tend to be smaller than Police Departments. Typically, the Sheriff’s Department is responsible for enforcing the law on a county rather than city level (unless there is no city police, then it is responsible for city law enforcement as well). A Sheriff’s work is done both in and out of the office; patrolling the county and managing paperwork like warrants, complaints, and deputy patrol activity records are typical job duties. Those who would like to run for Sheriff should be at least 21 years old, have no felonies, and have a high school diploma or a GED. However, as in most law enforcement careers, education beyond a high school diploma or GED is always preferable and advantageous. To illustrate, a degree in Criminal Justice from an accredited college will get you much farther than a high school diploma.

As with other law enforcement positions, regardless of rank or department, good physical fitness is essential to the job. You may have to sit or stand for extended periods of time, lift moderately heavy objects or persons, search in confined areas (under dashboard, for example), and pursue suspects on foot. Vision and hearing must meet department standards (vision correction is acceptable). The ability to communicate effectively both verbally and in writing is imperative, and you are expected to possess basic math skills.

In brief, a Sheriff’s Deputy job description reads much like that of a Police Officer’s, with a few exceptions. Primarily, Sheriff’s Deputies provide security for the county court, often in the form of bailiffs. They also escort prisoners to and from the county jail, often working with the state corrections facility. They answer to the Sheriff and patrol the county.

General Job Duties of a Sheriff 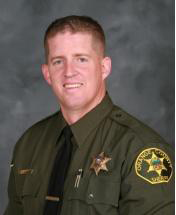 Want to know what it’s really like to be a Deputy Sheriff in a major metropolitan area? Check out our interview with Deputy Scott Steinle of the Orange County Sheriffs Department.

Let’s start off easy, could you give a short history of your work as a deputy and why you chose to pursue a career in law enforcement?

I work as a patrol deputy for the OC Sheriff’s Department North Patrol Region. Before that I’ve worked as a jail deputy, a bailiff, and a recruitment officer. I wanted my career to be something that reached out and affected all areas of my life: to be physically and mentally active, help other people and something that was different everyday. Being a police officer seemed to be the best fit. . . . Read the full interview here.

What is the difference between a Sheriff and a Police Officer? 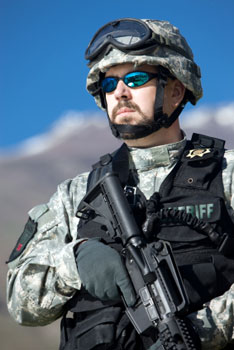 What is the difference between a Sheriff and a Deputy?

A Sheriff supervises his or her Deputies; Sheriff is a higher ranking, elected position and there is only one Sheriff to several Deputies. Deputies must have law enforcement training, whereas Sheriffs do not always have to have such training.

How do I become a Sheriff?

Because Sheriff is an elected office, you would first have to wait for an election year then campaign in the county you are interested in being Sheriff. The best way to prepare is obtain law enforcement training and education. Being in law enforcement already is a huge advantage when running for Sheriff, and in most cases it is required.

What level of education do I need to become a Sheriff?

Although most Sheriff’s education requirements list having a high school diploma or its equivalent, possessing an Associate’s or a Bachelor’s Degree in law enforcement is ideal.

What is the Jurisdiction of a Sheriff compared to a Police Officer?

A Sheriff’s Jurisdiction is countywide, whereas a Police Officer is citywide.