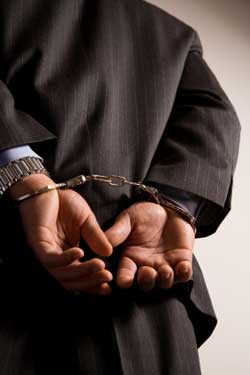 In contemporary America, Martha Stewart is sometimes known as the ‘poster child for white collar crime’. On December 27, 2001, Stewart sold 4,000 ImClone shares valuing approximately $230,000. The sale occurred a day before the FDA announced that they were not reviewing ImClone’s latest drug, Erbitux, causing their stocks to plummet. Stewart allegedly committed insider trading after receiving advice from her broker, Peter Bacanovic, to sell her shares.

According to the Daniel Fund Ethics Initiative at the University of New Mexico, the charges of securities fraud against Stewart were dropped but she served five months in prison and five months on house arrest for “four counts of obstruction of justice and lying to investigators”.

The term ‘white collar crime’ was coined by Edwin Sutherland in 1939. He defined it as “crime committed by a person of respectability and high social status in the course of his occupation”. It is sometimes confusing when differentiate between white collar crime and corporate crime. Both generally delve into the financial world where the motive is, simply put, financial gain. While not directly forms of violence, they are not victimless crimes and in some cases human safety and lives are jeopardized as a result.

While white collar and corporate crimes are difficult to detect and thus prosecute (“the perpetrators use sophisticated means to conceal their activities through a series of complex transactions,” states Cornell University Law School’s Legal Information Institute) there are numerous governmental and law enforcement bodies that legislate and crack down on these criminal acts. These include the Federal Bureau of Investigation (FBI), the Secret Service, the IRS and U.S. Customs as well as other federal and state agencies.

According to the FBI, white collar crimes cost the United States approximately $300 billion per year, adding that this is a modest estimate. Cornell University Law School’s LII defines white collar crime as generally encompassing “a variety of nonviolent crimes usually committed in commercial situations for financial gain”. White collar crimes may be differentiated from corporate crimes in that they are carried out by an individual for his or her own interests rather than on behalf of the company he or she is working for or dealing with. The types of white collar crimes are numerous and include insider trading, computer, internet or phone fraud, health care fraud, bribery, tax evasion, trade secret theft, antitrust violations, counterfeiting, insurance fraud, kickbacks and more.

Famous white collar crime cases include during the 1990s when Nick Leeson covered up his bad trades with his employer Baring’s error account, resulting in the company losing $1.4 Billion and having to declare bankruptcy; or Bernard Madoff’s massive, worldwide ponzi scheme (described further in the Case Study section). 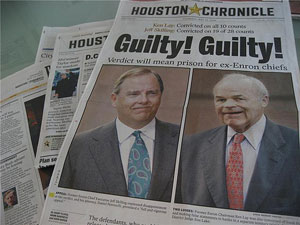 Corporate crimes, generally speaking, are criminal acts conducted by a corporation or business or personnel representing the interests of their corporate employers. Western Michigan University at Kalamazoo’s Ron Kramer defined corporate crime as, “illegal and/or socially harmful behaviors that result from deliberate decision making by corporate executives in accordance with the operative goals of their organizations.” T.R. Young of the University of Wyoming adds that corporate crimes are carried out due to the desire for power, growth and control and that they are structural in nature (i.e. the blame cannot be pinned on only one individual).

Corporate crimes range over a full spectrum, from price fixing conspiracies and fraud to criminal liability cases – those scenarios where company actions cause severe environmental degradation or the loss of countless human lives. Young describes how corporate crimes are far more powerful than street-level acts. “The hundreds of dollars taken in armed robbery are minuscule compared to the billions taken by oil company price fixing conspiracies or insurance company conspiracies to defraud automobile owners. The hundreds taken by burglars are small compared to the millions taken by one stock market swindle”. He points out several examples such as an insurance company stealing billions of dollars from its stockholders through deceitful acts through creating fictional insurance policies and other actions; or a tire company knowingly selling defective tires to millions of customers.

When Sutherland studied 70 major companies in the United States during the late 1940s he found that 97% of them reoffended, even after they were caught and prosecuted. In fact he stated that corporate crimes were the rule not the exception. Young states, “Sutherland found that criminal behavior of these corporations was ‘normal,’ that is to say, they all engaged in illegal labor practices, falsified advertising, stole patents and copyrights from each other, defrauded their customers, and conspired to control the making and the marketing of goods and services”. The motivations might seem black and white. Those individuals who commit white collar crimes do so for financial reasons (either fueled by survival instincts or greed) and companies commit crimes to grow, flourish and in some cases survive.

But beyond this, are there other motivations for committing crimes in the corporate world? According to Pamela H. Bucy et al. (“Why They Do It: The Motives, Mores and Characters of White Collar Criminals”), white collar criminals generally fall into two categories – leaders and followers. Bucy et al. stated that leaders were motivated to commit white collar crimes for other reasons besides financial gain, money and greed. These motives included ego or a sense of entitlement, the opportunity presented itself and even fear of being fired due to lack of performance or not wanting to lose their current lifestyle. Competitiveness for being the most successful was also a stated reason. The motives for followers, who take the lead from someone more assertive to commit a white collar crime, are understandably at least partially based on their more passive or conformist nature. Bucy et al. explain that followers may choose to participate in white collar crimes because they put their faith in their leaders or alternatively they want a “piece of the action” to overcompensate for their sense of weakness and to raise their status. In some cases, followers may engage in work- or financially-related crimes because they fear there will be negative repercussions, such as being fired or having their health and safety threatened.

Some criminal psychologists also refer to the fraud triangle, developed by sociologist Donald Cressey, to explain motivations behind these types of crimes. It is based on the fact that if three factors are present an individual is tempted to carry out deceitful, financial acts. The three components are: incentive or pressure (ranging from financial gain to the fear of losing one’s job), the opportunity (such as the means to conduct ruthless transactions with little risk of being caught) and the ability to rationalize (such as thinking he or she will be able to pay the firm back or that their company does not pay them a high enough salary). 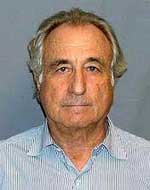 Bernard Madoff confessed to arguably the largest fraud or ponzi scheme in history. From 1990 (prosecutors say it may have started in the 1980s), Madoff eluded federal law enforcement authorities and his investors until he pleaded guilty to 11 felony counts in 2009. He essentially collected investments from companies and individuals and paid them off with others’ investments rather than the profits. Those profits, estimated by Business Pundit to be nearly $65 billion dollars, Madoff pocketed himself. The results of his fraud included several investors losing their entire life savings and even one taking their own life. Madoff was sentenced to 150 years imprisonment and now resides at the Butner, North Carolina Federal Correctional Facility. “I am painfully aware that I have deeply hurt many, many people, including the members of my family, my closest friends, business associates and the thousands of clients who gave me their money,” said Madoff in court, according to The Wall Street Journal (2009).

There are numerous theories on what motivated Madoff to carry out his white collar crimes. Madoff himself said he initially started because he felt pressured to give his investors larger returns than the markets were able to provide in the early 90s, adding that he thought it would just be a short term solution.

Some have called Madoff’s actions affinity fraud since many of his victims were wealthy friends and acquaintances sharing his Jewish ethnicity. Adam Lebor of The Jewish Chronicle Online pondered whether Madoff was somehow seeking revenge against wealthy Jewish families whose establishment in the United States predated Madoff’s grandparents and other eastern European Jews, where the latter were allegedly discriminated against by their predecessors. Psychoanalyst Dori Laub suggested Madoff may have suffered from depression or an inferiority complex and wanted to feel all powerful in order to fill his void created by insecurity. Author and Psychiatrist Rivka Galchen theorizes that Madoff, and those similar to him, act in a way as if each day is their last, that the future is non-existent. Galchen said (as reported by The Jewish Daily Forward), “Otherwise he wouldn’t have been able to sleep at night for pretty much the majority of his professional life”.