A Closer Look at the Mind of a Serial Killer

Ted Bundy, Edward Kemper, Anders Behring Breivik, Jeffrey Dahmer and Aileen Wuornas – all of these famous individuals were serial killers except for one. Can you guess which one?

There are numerous definitions for the term, but generally a serial killer is described as someone who has killed three or more individuals and the murders took place on separate occasions, meaning there is cooling off period between each of the killings. At a Serial Killer Symposium organized by the FBI’s Behavioral Analysis Unit (BAU), the following definition for ‘serial murder’ was created: “The unlawful killing of two or more victims by the same offender(s), in separate events”.

That brings us back to our question: Which of those famous aforementioned murderers is not a serial killer? The answer is Anders Behring Breivik, who in 2011 killed 77 people – eight via car bomb in Oslo and 69 on Utoya Island by embarking on a shooting rampage. Since the murders all took place on the same day, and considered part of a single event, Breivik is considered a spree killer.

It is a myth that serial killers are necessarily geniuses. While noteworthy murderers like Ted Kaczynski, Edward Kemper and Ted Bundy had above average IQs, others like Donnie Gene Craig, Simon Pirela, and John Staffen had below average IQs.

A traumatic upbringing may be a factor in someone becoming a serial killer, although many people who grow up in an abusive environment do not become murderers. According to Dr. Mike Aamodt (Radford University), it was found in 2005 that 36% percent of serial killers had been physically abused (compared to 6% reported by the overall study subjects), 26% had been sexually abused (compared to 3%) and 50% had been psychologically abused (compared to 2%). Henry Lee Lucas, who was convicted of 11 murders but at one time confessed to 600 murders (believed to be a hoax), had a very traumatic upbringing. When he was only three years old, his mother made him watch her have sex with several different partners. At age ten, his mother’s boyfriend demonstrated to him how to kill and have sex with animals. 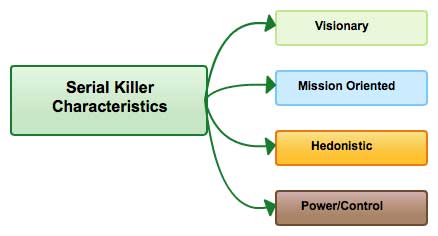 R. Holmes and J. DeBurger (1988) and R. Holmes and S. Holmes (1996) developed a theory that serial murders may be classified into four categories based on motive.

A Closer Look – Categories Based on Motive:

Visionary: These serial killers generally suffer from a form of psychosis where their delusions or hallucinations command them to kill. Herbert Mullin is an example of a visionary serial killer who believed voices told him to kill in order to prevent an earthquake. He also burned his penis with a cigarette because voices told him to do so.

Power/Control: These serial killers murder due to the satisfaction they gain of having complete power over their victims. Sex is often part of this type of serial murder. Ted Bundy, who confessed to murdering 30 women (as well as kidnapping, raping, mutilating and having sex with them after they were dead), is an example of a power/control serial killer.

Mission: Mission serial killers murder because they are motivated to seek revenge or eliminate a particular group of people. Their motives are generally not created out of psychosis. Carroll Edward Cole is an example. His mission was to kill women who cheated on their partners and he killed at least 13 women who had sex with him.

Hedonistic: Hedonistic serial killers are driven by the thrill/rush, lust/sexual pleasure or gain (such as financial) brought on by murder. “Killing is an eroticized experience fueled by the linking of sex and violence in the developmental history of the offender,” writes Jacqueline B. Helfgott (in her book Criminal Behavior – Theories, Typologies and Criminal Justice). Black widows fit into this category, such as Lydia Trueblood who killed five husbands and her baby daughter. Jeffrey Dahmer is another example of a hedonistic serial killer. His crimes involved the murder of 17 young men and boys coupled with rape and necrophilia.

The FBI’s BAU describes other possible motives for serial killing including a person’s ideology and their affiliation with organized crime. The BAU adds that law enforcement, such as detectives and crime scene investigators, should not dwell on one possible motivation type, since a serial killer’s can have multiple motives which also can evolve and change over time. “The classification of motivations should be limited to observable behavior at the crime scene,” adds the BAU’

Are All Serial Killers Psychopaths?

Serial killers differ from one another in various ways such as by their MO (method of operation or modus operandi), their motivation and personality disorder. While not all serial killers are psychopaths, the FBI’s BAU Symposium discussed that several serial killers share psychopathic tendencies. These include a fake charm, lack of remorse, little emotion, a tendency to pathologically lie and a grandiose sense of self. Not all psychopaths become serial killers and serial killers may possess a few or many of the items on Dr. Robert Hare’s Psychopathy Check List.

Between 1982 and 1998, he picked up young women (many of them alleged prostitutes or runaways) had sex with them, strangled them and hid their bodies away in forests and other remote areas around King County, Washington. At first, he would return to their bodies and have sex with them again; then, he began to bury the victims as a means to resist his temptations for necrophilia. The first five women who lost their lives to his hands were found in and around the Green River.

Gary Leon Ridgway, known as the Green River Killer, has the most murder convictions of any serial killer in the United States. As of February 2011, Ridgway pled guilty to his 49th count of murder in the killing of 20-year old Rebecca Marrero back in 1982. Just recently (June 18, 2012), the remains of Sandra Denise Major were identified and tied to Ridgway. In exchange for a sentence of life in prison without any possibility of parole, rather than the death penalty, Ridgway made a deal that he would confess to all his murders and lead law enforcement to their remains; so far he’s admitted to killing at least 70 young girls (some sources say 71).

In 1983-84, Ridgway became a suspect for the Green River killings since a witness saw one of the victims, Marie Malvar, struggling with him in his truck. (He also had a criminal record for soliciting prostitutes). But, in 1984, Ridgway passed a polygraph test. Sheriff, formerly detective, Dave Reichert was on the Green River Killer case from the beginnings until Ridgway was arrested in 2001 due to DNA evidence linking him to four victims. Reichert and his fellow investigators described the Green River Killer as a pathological liar, who wanted to be the center of attention, to be in control and who took pride in his “career” of strangling women. Reichert added, “there’s no remorse. He doesn’t have any feelings toward anybody, his family included,” as reported by The New York Times in 2003.

According to “The Role of Psychology and Geography in the Green River Murders” by Sean M. Cramer, Ridgway fits the power/control category of serial killer, characterized by experiencing sexual gratification from overpowering his victims. However, Jacqueline B. Helfgott states that the Green River Killer fits the mission serial killer mould, characterized by the desire to seek revenge against a particular type of person (i.e. prostitutes that reminded him of his mother). In the case of Ridgway, the hedonist typology of serial killer must also be considered since sex was a consistent part of his MO.

Cramer describes Ridgway’s relationship with his mother: “Ridgway’s mother was a very dominant figure that cruelly punished him for his shortcomings and made it clear that she was disappointed in him. LaBrode (2007) states that Ridgway’s mother abused him physically and verbally” Numerous sources say that Ridgway was sometimes sexually aroused by his mother (she would dress inappropriately in front of him and possibly sexually assaulted him); at other times he was extremely angry with her (he would refer to her as a “whore”). Additionally, his interactions with his father may explain why Ridgway engaged in necrophilia. According to Cramer, his dad, who worked in a mortuary, told him about a staff member who engaged in sexual acts with the corpses.

Ridgway was a more prolific serial killer when he was having problems with women in his personal life. “Gary Ridgway, the Green River Killer, began his career as a sexual homicide offender after his first divorce, and his offending behavior increased during problematic periods in his relationships with women (e.g., between his first, second, and third marriages),” states Helfgott.